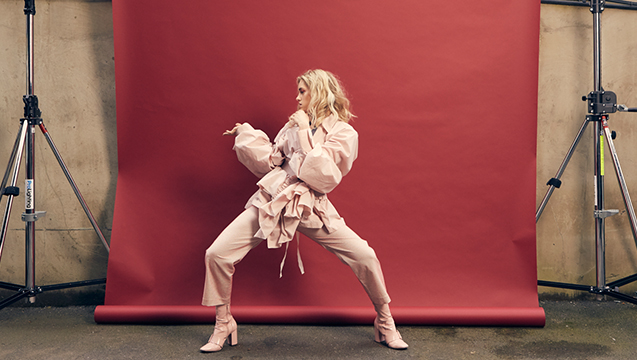 Over the last few years she’s mastered the art of writing music that does just about everything but fit the conventions of pop. From the striking minimalism of her initial EP The Heart to the arresting rhythms of second EP The Body, Starling consistently veers towards the left-field.

Now unveiling the third in her trinity of EPs, Starling has released The Soul, a mercilessly catchy record that shimmers with slick vocals and sparkling production, courtesy of electronica legend Henry Bins of Zero 7.

Proclaimed as the ‘pop princess who DGAF’ (doesn’t give a f*ck) by Wonderland Magazine, Starling has built up some impressive support thus far from the likes of BBC Radio 1 and 6 Music, The Line of Best Fit and CLASH, to name but a few.

We had a chat with Starling to learn what she does GAF about...

I Am, I Feel by Alicia’s Attic - must have been about 10 years old and went mad for it. That video as well lol, it’s everything.

Oh my god this is terrible - Will Young.

A recorder. My mum wanted to kill me.

Oh it’s the worst (and annoyed my six(!!) siblings all childhood) - replacing very famous songs with lyrics I’ve made up, ie getting iconic lyrics wrong. Every. Time.

I had dinner recently with one of the Dire Straits and he said - 'Starling make sure you put the essence of you in the record, that’s all you need to do and nothing more. Don’t worry about all the extras and the noise in the industry, worry that the record absolutely and totally represents you'.

I discover new music on Shazam, walking around streets, shops, TV and press to see who it is. And Spotify of course.

Hard one as I love a lot for different reasons but saw Prophets Of Rage at Brixton Academy and loved that venue after years of meaning to go. Blacks Club is great for intimacy.

My favourite artist at the moment is Christine and the Queens, or Chris as she is now known - she deals with the big stuff and is cool and effortless with it. An icon.

Therapy and people. Or is that the same thing?! I love seeing and experiencing reactions, situations, events in my life and others. Really, I have realised the more I can understand my own character the more I can understand the human condition. We think our problems are unique and that we are alone but music makes me realise that we are all so similar.

Profiteroles has the minimal storytelling light feeling, but then Pink Wallpaper has the dark soul, and I think I can’t be one thing so hence my songs are a bit various re dark and light. I’m not just one flavour, so the record isn’t either.

The debut album next year. I’ve made three EPs over three years. The heart. The body and now the soul. Next is the album, and I know what I want to say. Also a tour and maybe some more pudding named songs lol.