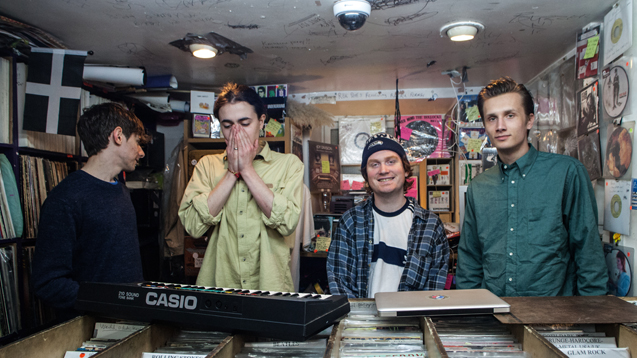 Not only do Shark Dentist have the best band name we’ve heard in a while, but they’ve also got the tunes to match. Meet these ‘pizza pop’ masters in our 30 seconds…

Not only do Shark Dentist have the best band name we’ve heard in a while, but they’ve also got the fuzzy tunes to match.

Meeting at music school in North West London, they came together through a shared love of Teenage Fanclub, Blur, Pavement and Dinosaur Jr. The band formed just over a a year ago after guitarist and vocalist Grady Steele cut himself shaving and decided to write a song about it (obviously titled I Cut Myself Shaving).

The ace nineties-esque Stranger is even harder to shake off once it’s hooks have sunk in - it’s also seen tastemakers including Steve Lamacq, Lauren Laverne and John Kennedy all smitten.

When they’re not playing, the band host their own Black Cat White Night club. The next installment takes place on 2 June at the Shacklewell Arms to celebrate the unveiling of new single Florentine, released on Ra-Rok Records, the label run out of the legendary Camden record store of the same name. We get in the water and find out why these dentists have got their musical fangs bared...

We first started writing music because
We accepted an opening slot on a bill before we had rehearsed or written any songs. Naturally, we felt we should give it a crack before we got on stage.

We have been making music since…
January 2015, so just over a year.

Our music is…
A blend of sandwich metal and pizza pop.

You'll like our music if you listen to...
Pavement, Blur, Teenage Fanclub.

Our favourite venue is…
The Windmill, Brixton. Met and played with loads of friends there - never had a bad night!

Music is important because…
We have no other marketable talents.

Our biggest inspiration is…
The mundane.

Our dream collaboration would be…
Bill Murray.

To try us out, listen to our song…
Stranger.

If we weren’t making music we’d be…
Homeless.

Watch the video to Stranger.