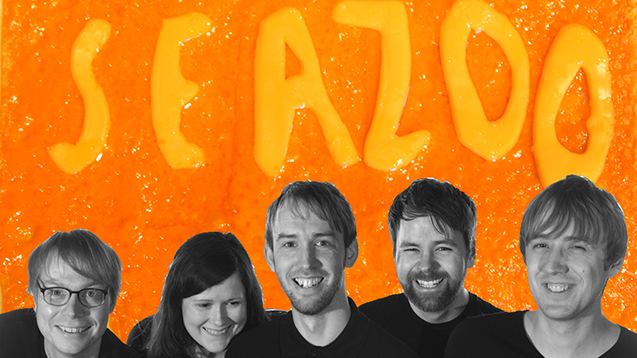 Chock full of jaunty harmonies, wonky keys and melodic riffs to sink your teeth into, Welsh wizards Seazoo have brewed up a delightfully poppy racket on their debut album, TRUNKS.

They first snagged our ears in January with their single Dig – a bright and boppy number about digging up Yamashita’s gold (what else?) that brought us all the right Gorky's Zygotic Mynci feels.

Citing influences like Yo La Tengo, Blur, Super Furry Animals and Grandaddy, the five-piece have perfected their sound on stages including Green Man, Canadian Music Week, Festival No.6 and The Great Escape, toured with M faves The Lovely Eggs and received plenty of radio love over at BBC Radio 6 and BBC Radio 1.

Debut TRUNKS was self-recorded between a decommissioned nuclear bunker and a spare room in their hometown, and gets the launch party treatment at Telford's Warehouse in Chester on 10 February.

Ahead of the gig (plus plenty more in the diary – see below), we chatted to Ben to get the lowdown on their brilliant bedroom psych-pop...

What was the first song you developed an obsession for?
Crosstown Traffic - Hendrix.

What’s the first gig you went to?
Bay City Rollers at Butlins, Bognor Regis. The bass player had a headless bass guitar, it confused me. I was a child and didn't know what was going on.

What’s the best piece of musical advice you’ve ever been given?
Listen to what the drummer's doing.

Where do you discover new music?
Radio/social media.

Who is your current favourite band/artist?
Gintis.

What inspirations outside of music impact your songwriting?
Personal experiences. Location/environment.

What track of yours best represents your sound?
Dig.

What’s next for you?
Just released our debut album TRUNKS, will tour this in the next months - dates below! I'm just finishing off album two, and recording it in May at Big Jelly Studios, Ramsgate. Should start album two promo end of this year! New songs sounding good!