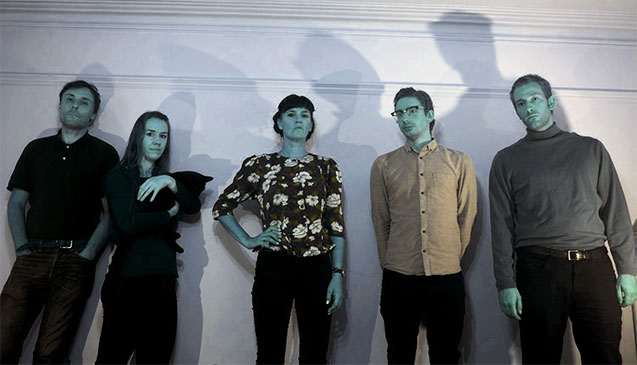 Fielding eighties no-wave into the playful pop tropes of sixties girl groups, The Plan are mashing up our sonic past through the current prism of Broken Britain - with neat results.

The natural world, a reluctance to fit into society and the doctrine of relativism are just some of the notions fuelling Southend post-punkers The Plan.

Fielding the remnants of early eighties no-wave into the playful pop tropes of sixties girl groups, they’re a five piece mashing up our sonic past through the current prism of Broken Britain.

With the record  landing this Friday (13 October) on Southend Records, we catch up with The Plan lynchpin and founder of the imprint, Rebecca Gilleron, to learn more about them…

When I was a kid I REALLY liked It’s My Party (and I’ll Cry if I Want To), released by Barbara Gaskin and Dave Stewart in 1981. I think the whole tragedy of the song appealed to me, that and the amazingly long gold nails Gaskin has on the cover. I bought the single with pocket money in Woolworths. I think that was the first record I bought.

When I was really young my parents took me to a Midge Ure gig, because he was a friend of a friend, and all the kids went backstage and got teddy bears. Weird! The first gig I went to as a teenager was probably The Cure at Alexandra Palace. It was absolutely brilliant, especially because we were hoovering up ideas for goth hair.

The recorder at school. Everybody had recorder lessons, we all sounded terrible individually and collectively even worse. Bass recorders would have been much better. Actually, I forgot - violin lessons! The teacher would stand us by the fire and our legs would be burning but we were too scared to say anything… there was a leopard skin draped over her piano and we had to practice Twinkle, Twinkle Little Star on repeat. Happy days…

Starting songs on A. Using too much reverb on the vocals in recordings.

I don’t think I’ve been offered much musical advice apart from ‘Do you want me to tune your guitar for you?’ whilst playing a gig in Brighton. Such a sweet guy…

Gigs. Through playing gigs with new bands, or bands we’ve not heard of, or looking at listings for gigs with bands we like and seeing who they are playing with.

Oooooh, I used to love The Bull and Gate in Kentish Town and the Buffalo Bar in Islington but currently it’s the Railway Hotel in Southend, where we live, run by Fi and Dave Dulake. It’s where I came across the great Mr Yolk, which Southend Records are releasing soon, and Tumble Dryer Babies and Melodie Group, who we also aim to release next year. It’s a brilliantly inclusive venue, housed in a fantastic sprawling Victorian building.

I would have to say Mr Yolk, who we’re about to release - plug plug! And Euros Childs who we are about to put on in Southend – plug again! I really like Terry on Upset The Rhythm too at the moment. And have recently been reminded of how brilliant The Rebel is. Everyone should buy his entire back catalogue including The Country Teasers and Male Nurse.

The natural world. A reluctance to fit into society. Relativism.

Oh god, that’s impossible to answer. Can we put two: a loud one - Annotate the Text and a quiet one - The Wall?

The Plan's Nervous Energy is released on 13 October via Southend Records. Pre-order. They play Urban Bar, London, on 3 November, and support Euros Childs at The Railway Hotel, Southend, on 18 November.

https://soundcloud.com/theplansouthend/pier-party-nerves
New Music
Back to top