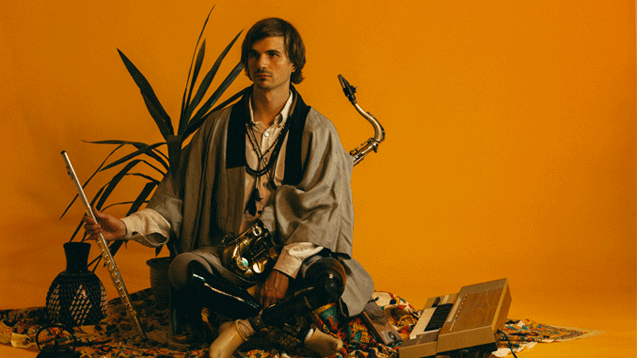 Pete Beardsworth is a sax and keys player, soundscaper and beatmaker working at the more spiritual end of the jazz spectrum. Get to know him ahead of the release of his debut EP...

Pete Beardsworth is a sax and keys player, soundscaper and beatmaker working at the more spiritual end of the jazz spectrum.

He was handpicked by the Brownswood team to join Gilles Peterson’s Future Bubblers mentorship programme, alongside alumni including Yazmin Lacey and Mali Hayes, and has since emerged as one of the most exciting new names in jazz.

His debut EP, Pour Un Homme Seul, offers a transcendental journey into Pete’s recent state of mind, and boasts influences as diverse as Aldous Huxley, Carl Jung and Eastern melodics. It was written during an extended period of solitude following a traumatic accident that left Pete without the bottom half of his legs.

Ahead of it’s release on 21 September, it has already been described as ‘brilliant’ by Peterson and has been given airtime on Worldwide FM and BBC Radio 6Music.

The EP follows collaborations with Yazmin Lacey, for whom he produced EPs Black Moon and When The Sun Dips 90 Degrees, the genre-crossing Invisible Orchestra and a release on independent UK label Collective Resonance.

Pete has also been busy scoring the soundtrack to Chris Rock’s recent Netflix special Tamborine, and is one third of The Three Body Trio.

Here, he lets us in on his fascination with minimal composer Terry Riley and why he finds ceremony within music so inspiring…

Pure Shores by All Saints, I used to love that song.

Average White Band at Norwich Waterfront when I was 13 or 14. I brought my friend Beej, who I was trying to convince to play bass in a funk band at the time.

My grandparents’ piano, at their house. My grandpa could play chopsticks and I thought that was pretty cool. Apparently, I was so obsessed with it, I pestered my parents until they moved that piano to our house and I started having lessons.

Playing in C minor by default! Also playing the same sequence - C minor, Ab major, F minor - by default whenever I sit down at a piano.

‘I think that I’m an antenna. Nothing originates with me, it doesn’t start with me,’ Terry Riley. I wish he’d given it to me directly but it’s from an interview.

Friends! I would love to say I didn’t use Spotify and Youtube and all that stuff as well but I use them loads.

I like Jam Cafe in Nottingham and Koko in London. Most of all, I like being outside for gigs.

Terry Riley! I hope very much one day to meet him.

Ceremony! Being a part of something bigger in what I write.

Maybe to the Place is a nice introduction.

The release of my EP and getting together with some friends to play songs from it. Making more music!