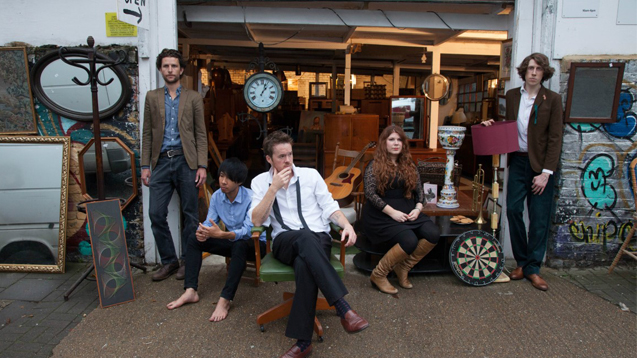 Patch & The Giant are a dynamic musical troupe who have become a fast rising force within alt-folk. Don’t miss forthcoming debut LP All That We Had We Stole in 2017.

Patch & The Giant are a dynamic musical troupe who have become a fast rising force within alt-folk.

They released their debut EP The Boatswain’s Refuge on Folkroom Records in 2013 and have since invested some serious time in honing their craft on the road. Their gigging adventures have taken them from Green Man Festival and Secret Garden Party to the stages of Wilderness and Boomtown.

The group’s debut LP All That We Had, We Stole will be released in February 2017 and showcases their eclectic take on folk, harnessing elements of indie, rock and blues and fuses them with inviting story-telling, courtesy of lead singer Luke Owen’s vocals.

Catch the band out on tour in 2017 to celebrate the record’s release – but in the meantime, we get the skinny from the band’s Angie Rance in our 30 seconds interview…

We first started writing music because…
We needed to.

We have been making music since…
Together since 2010 in one form or another but the five of us right now, for three years, maybe a little less. As individuals? Since the womb.

Our music is…
Many things. Our style has ebbed and flowed in slightly different directions as we've grown to create the sound we now consider ours. For a while there we'd gained a reputation as a shanty band. Not really sure how that came about but I'd say we're really, really not. We've all got very different musical backgrounds and influences, from metal to classical to experimental to brass band, to good old fashioned rock and roll ... and at times we like to let a little bit of each of us out in the songs.

You'll like our music if you listen to...
Elvis Perkins, Beirut, The Beatles, The Decemberists, Johnny Flynn.

Our favourite venue is…
For me, 'Ex Cinema Aurora' in Livorno, Italy. It's an amazing old cinema building that was derelict until a few years ago when some locals decided to have a New Year's Eve party there. It's been operating as a music venue ever since. The place is just amazing and floor to ceiling with bizarre film props and cinema chairs suspended mid-air. The stage was decorated with Napoleonic military get-up the evening we played there.

Music is important because…
It captures time.

Our biggest inspiration is…
Impossible to contain within a singular source. All of the artists out there really, in the broadest sense of the word artist. There's inspiration from so far and so close that colours how we write and how we deliver, which might change on a daily basis. We're all chameleons after all and one of the things we like to embrace is being able to follow that source of inspiration freely.

Our dream collaboration would be…
Pretty sure we'd all give different answers to this one.

To try us out, listen to our song…
Flowers.

If we weren’t making music we’d be…
Listening to music.

In 10 years’ time we want to be...
Headlining the Mountain Stage at Green Man Festival, with our own full driver so we stop arguing about driving shifts.

Patch & The Giant's debut album All That We Had We Stole is out February 10.

Listen to single Flowers below.