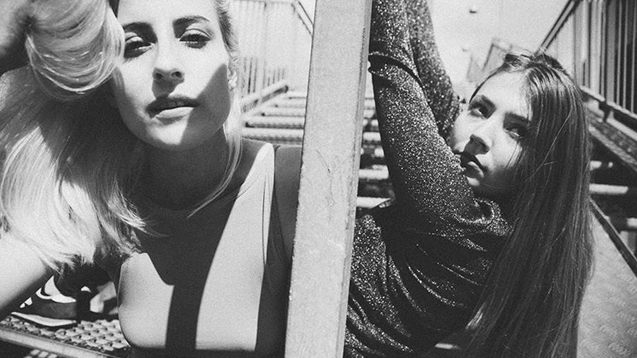 The Gothenburg-based duo make minimalist rock that lunges from deadly to saccharine in an instant. Find out what's been inspiring them...

Gothenburg-based duo Pale Honey make minimalist rock that lunges from deadly to saccharine in an instant.

Compared to riot grrrl heroines like PJ Harvey and Sleater-Kinney, it's been two years since the pair released their critically acclaimed self-titled debut album, and now they're back with their second full-length, Devotion: an assured slice of grunged-up pop.

Get These Things Out Of My Head is the first single off the record and it's a poised tune that comes off as the love child of Interpol's Slow Hands and Howling Bells' Low Happening.

Lyrically, the track deals with Tuva's Obsessive Compulsive Disorder which she's harboured since her teens. 'For me, this is very personal to talk about. I was so afraid of what other people would know about me,' she's said.

'But after I gave it some thought, why would I censor myself that way? We make music because it’s true. We write to deal with ourselves and things that happen around us.'

The band have embraced this new-found honesty with the album and it shows. More confident and assured than ever, they release Devotion on 13 October via Bolero Recordings.

Ahead of their upcoming London show, we caught up with Tuva and Nelly to find out what's been inspiring them...

What was the first song you developed an obsession for?
Tuva: All Along the Watchtower.
Nelly: Any Daft Punk song from the Discovery album.

What’s the first gig you went to?
Tuva: Sahara Hotnights at a Nöjespark in Gothenburg, hehe.
Nelly: Queens of the Stone Age after the Era Vulgaris release. It was sweaty!

What’s the first instrument you ever got hold of?
Tuva: I started taking piano lessons as an eight year-old kiddo.
Nelly: I got paid by my mom to play the violin for a year as a kid, but I guess the first would be my dad's harmonica.

What is your worst musical habit?
Tuva: I tend to forget to plug in my guitar at stage, and then I just stand there scratching my head and wonder why the hell there is no sound.
Nelly: I rarely listen to new music and so I'd say that my worst habit is being stuck in my own musical world.

What’s the best piece of musical advice you’ve ever been given?
Tuva: Listen to your gut.
Nelly: Have fun.

Where do you discover new music?
Tuva: I love Spotify’s Discover Weekly, hehe.
Nelly: My Spotify Discover Weekly is horrible. I usually end up on YouTube with the autoplay feature on when I am working by the computer and get overwhelmed when a song that I like goes on. Then that's the only song I listen to for weeks.

What’s your favourite venue?
Tuva: Pustervik in Gothenburg, of course.
Nelly: I second that. But we should definitely get cheaper beer when we're there.

Who is your current favourite band/artist?
Tuva: I have fallen in love with Dungen, again.
Nelly: I am all about Queens of the Stone Age again after the release of Villains.

What inspirations outside of music impact your songwriting?
Tuva: Anxiety and books.
Nelly: Hell yeah. We express ourselves with music and it keeps our minds busy.

What track of yours best represents your sound?
Nelly: That’s a tough question, it really depends on the mood of the songs and lyrics.
Tuva: Yeah I agree with Nelly! But maybe 0100 from the debut album? That song is very much us.
Nelly: Ok. That’s a good compensation for both lyrics and sound. It was my favourite when we had finished recording our debut album.

What’s next for you?
Tuva: ALBUM RELEASE AND TOUR!
Nelly: To get some proper sleep and release our second album!