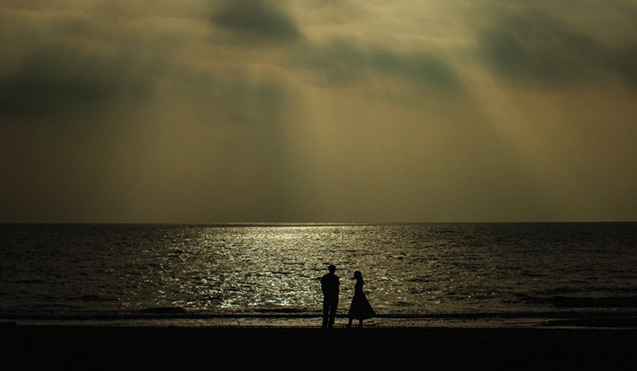 If you were into the spannered shoegaze of Maps and the noir-pop of Polly Scattergood, then you'll love their meeting of musical minds on new Mute Records project onDeadWaves...

Brand new Mute duo onDeadWaves call on sixties surf-pop and the darker, weirder backwoods of Catskills psychedelia for their tripped out sound.

Both already have impressive musical form: James Chapman was behind Maps’ spannered shoegaze sound while Polly Scattergood is lauded for her eighties-inspired noir-pop.

They officially arrived last autumn with their eponymous debut album –a cacophony of Lynchian soundtrack atmospheres, blissed out guitars and dusky melodies. Like a modern day Nancy Sinatra and Lee Hazlewood, they traverse a mystical path halfway between country and kitsch.

But their story spans back further than that: the pair first collaborated back in 2011 after Mute’s Short Circuit Festival at The Roundhouse in London. The night saw an impressive roll call of Mute artists come together, with Polly and James pairing up to perform each other’s songs.

As they prepare to open for synth-pop master M83 later this month - and put on their own headline show at Birthdays, London, on 7 June - we catch up with the pair to learn about the mechanics of their dreamtime sound…

We first started making music because...
When you write a song everything else disappears. The mind goes into a different space. It’s really cathartic, it's a good way of processing stuff and a lot of fun.

We have been making music since...
James: I played tambourine in a school Christmas assembly when I was four years old. I sold my soul to rock ‘n’ roll there and then.
Polly: I was always into music. When I was about 13 I discovered I could play a whole song backwards on an eight track machine to make it sound more interesting! That's when my music obsession really started.

Our music is...
Kind of like 3am on a Sunday morning. Atmospheric, on the edge of daylight, tripped-out, psychedelic, dreamy guitar with soundscapes, and vocals which tell stories.

Our favourite venue is...
Whichever has the best crowd! The audience makes the show. Although we both have fond memories of playing together at The Roundhouse a few years ago - that was a good gig and an awesome venue.

Music is important because...
Emotionally, spiritually and mentally it's something we can all share and enjoy. It is a universal language that makes people feel something. Also, pass the parcel would suck without it.

Our biggest inspiration is...
The people who go out to watch a gig on a cold winter’s night just to hear something new and exciting.

To try us out, listen to our song...
Blackbird or Blue Inside.

If we weren't making music we'd be...
It doesn’t bear thinking about.

In 10 years' time we want to be...
Hopefully still alive, and still making music. But maybe from a more exotic location like a beach in Bali!

On Dead Waves - Blackbird (Official Video) from Mute on Vimeo.
New Music
Back to top