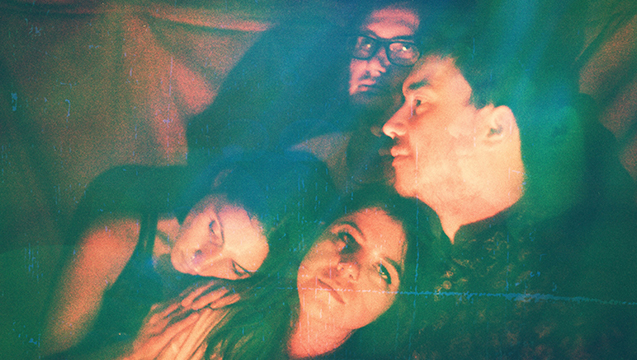 We catch up with Bristol grunge outfit No Violet, whose gorgeously fuzz-fuelled debut EP is a modern escapade into the mire and angst of late eighties' grunge.

Bristol grunge quartet No Violet have spent the last few years stomping their way around the city’s bustling music scene, unleashing their furious take on guitar music through a run of massive singles.

In this scrappy four-track sonic declaration, the band successfully stake their claim as the next act to put Bristol firmly on the map as a city that churns out some of the best bands in the UK.

Released through Leisure Records, the EP has already grabbed the attention of some pretty serious heavyweights, continuing their reign as the darlings of BBC Introducing, DIY magazine and Metro, to name a few.

By all accounts, No Violet are a band on the verge of making a serious impact on UK guitar music.

Tonight (Wednesday), they play The Victoria in London as part of a string of shows the band are doing across the South of England to celebrate Faces’ release.

Ahead of the show, we had a little chat with the band to see what goes on behind the scenes of No Violet, and what makes Ellie, Rhys, Pete and Kerry tick.

A cat keyboard that only made ‘meow’ noises. Another keyboard with pre-recorded anthems such as Elton John – Crocodile Rock.

Playing records on repeat until we never want to hear them again.

Always be genuine when you perform.

Festivals, local gigs, and friends’ recommendations. We’re lucky enough to have some talented musical pals, and the Bristol music scene is buzzing.

The Thekla Boat in Bristol. We’ve had some amazing gigs there and we’re there again headlining the Cargo stage on the 21st of July for Harbourside Festival!

Our latest single – Be My Friend. This is a single from our new EP that we recorded with Benjamin Johnson. He has managed to capture our sound so well and we can’t wait to show you!

We’ve just released our debut EP Faces with Leisure Records on a seafoam green transparent vinyl. It’s available now and we’re going to play a run of shows to celebrate!