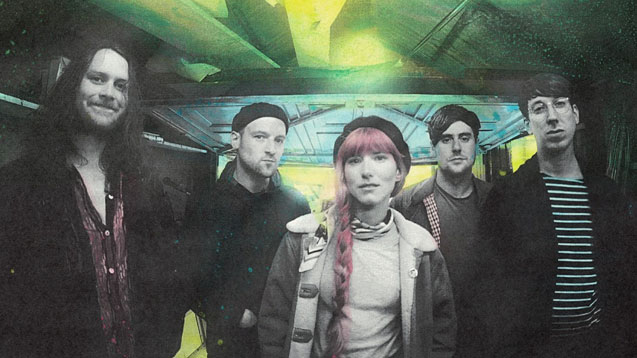 If lush melodies and anthemic riffs are your thing, then don't miss Night Flowers as they head out on a mini-tour with the sparkling debut LP, Wild Notion, among their musical arsenal...

Pop-loving indie five-piece Night Flowers are a collision of close friends from the North of England who randomly fell in with Boston-born vocalist Sophia Pettit in London.

Since their fateful meeting a couple of years back, the gang have been busy cultivating a melodic, sun-drenched sound that’s been lapped up by both tastemakers and discerning indie-pop addicts.

Testament to their broad appeal, Pitchfork, NME and BBC 6 Music all have their backs, while the band’s debut LP, Wild Notion, which landed last month, sold out in a matter of days.

Written in various London basements and bedsits, and recorded with long-time producer Adam Jaffrey in a studio that was later bulldozed to make way for luxury flats, Wild Notion is an instant charmer, brimming with bittersweet optimism and anthemic riffs.

The gang are taking the album on the road over the next couple of weeks – with a heap of festival dates in the summer too (details below). We caught up with Sophia before they set off to learn more about what makes them tick…

It must have been that surprise hoedown in our house in Oklahoma, with my parents’ friends' band. But my first proper gig was a Feeder concert at the Dome in Brighton.

My voice! Well, there was a brief spell with the recorder, then violin, but the first instrument I really loved playing was the piano. I took lessons from Sherry down the street. Or her sister Terry. They were identical twins and they both taught piano from identical rooms. I was shy about not being able to tell who was who, so I never asked.

Warming up my voice with weird cat sounds that make everyone else feel really really awkward.

On the flight back from playing in Berlin, fate put me in the seat next to Chaka Malik from NY hardcore band Burn. We chatted for ages, with husky voices. It's a little hard to explain in brief, but he told me that if he's starting to lose his voice, he'll notice he's outside himself. Call yourself back to centre and it'll come back, strong and clear, he said. I'll never forget that.

Oh it's everywhere, right?! Record shops, radio, gigs and friends...I've found some awesome stuff when I look for playlists compiled by my fave artists, on their Spotify pages and blogs. Grimes had a great Tumblr, but she doesn't use it so much anymore.

This little place in Nagoya, Japan called KD Japon. Tucked under a railway track, it's feels like a cosy treehouse and smells like a wood-panelled library. I'd love to play there again!

I listen to RONiiA on repeat, and turn to Julia Jacklin these days for good vibes. Also loving my friend's band Loud Sun.

Will a cheeky triptych do? The singles off our album offer a good even spread I reckon: Losing the Light, Cruel Wind and Hey Love.

Our debut album is just out and we've got some great shows and festivals coming up this summer so... buy our album and come see us play wherever you are!

https://nightflowers.bandcamp.com/
New Music
Back to top