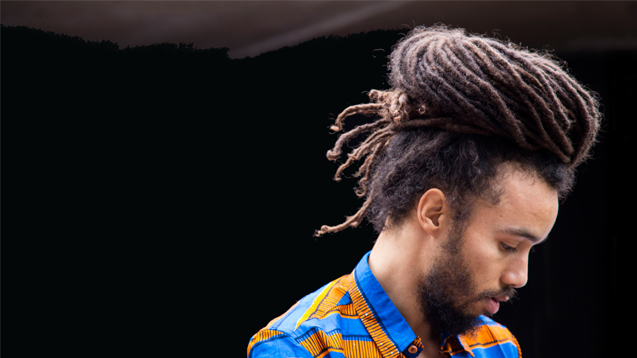 Future roots artist Natty is re-entering the musical fray in 2016 with his new album Release The Fear. We meet an artist excited by ‘music from the heart’…

Following his Top 20 debut album Man Like I, future roots artist Natty is returning to the fray in 2016 with his highly anticipated second album Release The Fear, a future-roots, concept album he claims is taking us on a journey through love and unity.

Described by critics as a ‘soul-reggae crossover sensation’, Natty is an artist channelling the revolutionary spirit of the sixties and seventies into these 21st century times.

Seven years in the making, this latest record taps various styles and sonics, championing soul and roots reggae with the ramble rousing Change featuring Busy Signal and Albarosie, at its heart.

Since parting with his major label, Natty has been hard at work building his own unique brand, independently releasing an award-winning EP, set up his record label Vibes & Pressure and a monthly club night by the same name. Natty is now out on tour ahead of the album release – get to know him below…

I first started writing music because…
I had to as the other options couldn't work. When I was young all I wanted to do was listen to records, so when I started playing guitar in school, putting words to music came naturally to me. All of the people I looked up to on the album covers did it.

I have been making music since…
I was 10 when I wrote my first song. It was called Mr Flyer and was a twelve bar blues structure. I even remember how it goes. I wanted to fly away because home life was not great at the time.

You'll like my music if you listen to...
Music from the heart, made by people, not programmes.

My favourite venue is…
Koko Camden. I’ve seen a lot of great shows there as I grew up quite close to the venue and can even remember seeing EZ and the garage massive in there when it was called Camden Palace… but that was another lifetime ago.

Music is important because…
It is a vibrational source of healing when used respectfully. Music can heal many physiological ailments as well as mending a broken heart, as well as unite people for good … or bad. The power of music is undeniable.

My biggest inspiration is…
People. Without people there would be nobody to perceive anything. A lot of my earlier songs are inspired by interactions, the subtle differences and universal truths in people are plants of inspiration, as are all the things this solar system and mother nature has to offer, but so far people are my biggest inspiration.

My dream collaboration would be…
Nina Simone or Jimi Hendrix.

To try me out, listen to my song…
I'm Alive. It is the first song of my upcoming album, giving thanks for life is the first step to Release the Fear.

If I wasn’t making music I’d be…
Learning how to make music, writing about music, helping someone else make music, I'd find a way to stay around it, or build myself a self-sustainable farm in a hot country and go live there and eat raw foods.

In 10 years’ time I want to be...
Making music, making a difference and generally be a better person and musician and singer.

Watch the video for I'm Alive.