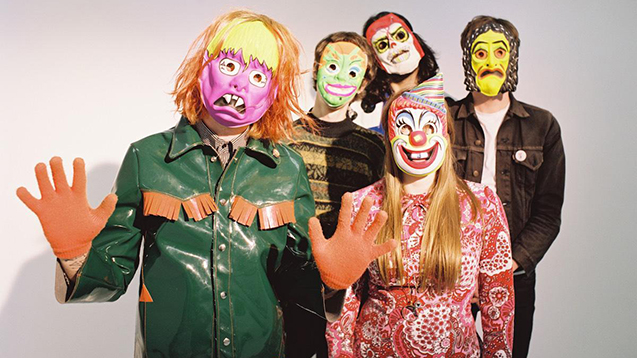 With a knack for glammed-up psych pop and a penchant for the occult, Mass Datura are five misfits making dreamy technicolor prog. We delved into the brain of frontman Thomas to find out what makes him tick...

Mass Datura are a rising London five piece with an ear for glammed-up psych pop and a penchant for the occult.

Taking their name from 16th century mythology – the datura flower, when ingested, was said to give you the ability to levitate – their gravity-defying sound gave birth in 2014, when Canadian-born Thomas Rowe formed the band with his best friend Joseph Colkett.

Intended as an outlet to channel his 'strange childhood experiences', he rallied up a group of like-minded London misfits, who since then, have been intriguing and delighting listeners with their space-age prog.

With supports under their belts for the likes of L.A. Witch, Holy Drug Couple, Dark Horses and Black Mountain, the band have developed a reputation for their raw and unpredictable live performances.

Latest single offering Fantasy Friction is a dreamy piano ballad taking in Bowie to Bolan grandeur, before giving way to a heavier jam topped with the psychedelics of The Flaming Lips.

With mini LP, Sentimental Meltdown, due out on 6 October via All Types of Slime Records, we delved into the brain of frontman Thomas to find out what makes him tick...

What was the first song you developed an obsession for?
Buddy Holly - Girl On My Mind. I was maybe seven/eight years old. Opened my mind to thinking sexy thoughts about girls.

What’s the first gig you went to?
My friend's band called Balacade in Victoria, Canada. Maybe 15 years old. He sounds better on his bedroom recordings, but was still cool to see him play.

What’s the first instrument you ever got hold of?
Harmonica, my father plays. So I used to have a go when I was young... promoted myself to a banjo after that.

What is your worst musical habit?
Forgetting parts that I wrote completely, but Nathan (drummer) has an agile mind and soaks up every note and tempo... I feel lucky, he's like my own personal four-track.

What’s the best piece of musical advice you’ve ever been given?
Well personally, I feed more from the negative remarks more than anything. It pushes me. But mostly all our friends are really supportive of our musical endeavours .

Where do you discover new music?
From all avenues really; friends, gigs, Spotify, compilations.

What’s your favourite venue?
So far my favourite we have played has been either Lexington in London or Mono in Glasgow, they have really good food there.

What track of yours best represents your sound?
For this album Sentimental Meltdown, I'd say Temporary Halo/ Fantasy Friction.

What’s next for you?
UK tour starts on 21 September, we will be supporting Black Angels, White Manna and playing Liverpool Psych Fest. We will also be playing a release show on 6 October at The Lexington with support from James Canty(4AD), Kristian Bell (The Wytches) and Tom Furse (the Horrors) will be DJing.

www.facebook.com/massdatura
New Music
Back to top