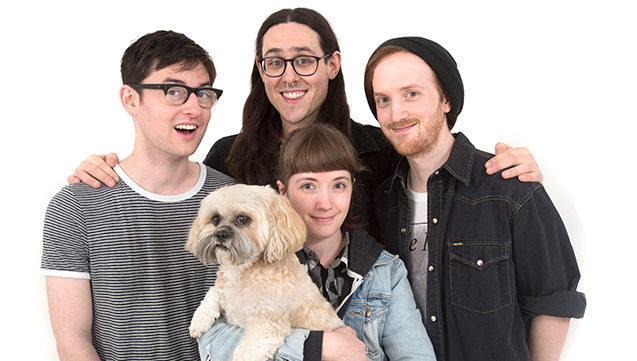 Martha are a power-punk quartet from County Durham in thrall to the kitsch soda stream pop of the mid-eighties. Don't miss their new garage/pop/punk pic-n-mix record, out today...

Martha are a power-punk quartet from County Durham in thrall to the kitsch soda stream pop of the mid-eighties.

All four of them sing and write, with Daniel and Nathan also playing in Onsind, while Naomi is in No Ditching.

Riffing on the unlikely inspirations of The Replacements, Heart, Billy Bragg, Thin Lizzy and The Go-Gos, their tightknit garage-punk is also undeniably bound to the C86 sound.

Their new album Blisters in the Pit of My Heart is released today (8 July), and follows their stonking debut Courting Strong, which came out in 2014.

Blisters’ lead track, Ice Cream and Sunscreen, has already been picking up plaudits from Pitchfork, Stereogum and Upset Magazine for its contagious hooks and heady summer vibes.

With the band hitting the road for the rest of July and August (tour dates below), we were lucky to grab 30 seconds with them to find out more about their infectious sound…

We first started making music because…
We all wanted to know what it was like to be in a pop band.

We have been making music since…
We were little kids, but we’ve been in this band since around 2012 (I think).

You'll like our music if you listen to...
Superchunk, The Housemartins, The GoGo’s, Marked Men.

Our favourite venue is…
Empty Shop in Durham - an amazing DIY-spirited art space that doubles as the coolest punk spot in the country.

Music is important because…
Without it we’d all be poets and that would be rubbish.

Our dream collaboration would be…
Paul Heaton.

To try us out, listen to our song…
Goldman’s Detective Agency.

If we weren’t making music we’d be…
Better off financially, but bored as fuck.

In 10 years’ time we want to be…
A pointless answer on Pointless.