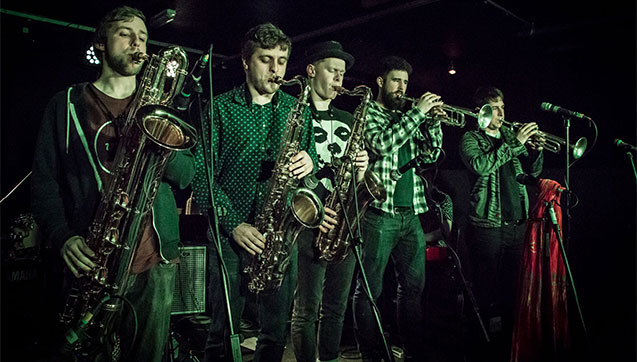 'The earth shall shake and the serpents will dance, for Mansion of Snakes is here' proclaim the psych-jazz 12-piece from Leeds. And who are we to argue? This is thrilling stuff...

Leeds’ 12-piece Mansion of Snakes are a psychedelic jazz behemoth whose poly-rhythms and serpentine melodies are pushing the genre into edgy new turf.

They describe their bone-shaking sound as ‘afro-beat, devil-funk and cosmic jazz’, but beyond the blazing horns and pounding percussion there also lies a heavy dose of Frank Zappa and Captain Beefheart.

The combo comes across as pure punk, with energy seeping out of every note to get your feet twitching and your ears tingling. The oomph is only amplified on stage, with venues and festivals across the UK playing host to their winding, blinding improv.

Their latest slice of wax comes courtesy of forward-thinking Leeds imprint, Come Play With Me, which has already dropped memorable split sevens by the likes of Magic Mountain, Fizzy Blood and Cinerama.

Released last Friday (6 April), Mating Season has been on repeat here at M towers all week. To celebrate its arrival, we grab the Snakes’ Greg and Ben for a quick chinwag to unpick what makes them tick…

What was the first track you developed an obsession for?

Ben: I loved a lot of the punk and new-wave that my parents played when I was very small, especially The Blockheads, The B-52s, The Stranglers, Talking Heads, but I couldn't say I was obsessed with a particular track. I guess that came when I started getting into jazz. It might have been Watermelon Man by Herbie Hancock. I know that Dexter Gordon's solo on that record was the first thing I ever transcribed, before I really knew what transcription was. I was just playing along.

Greg: I remember really liking Tin Soldier by The Small Faces and Sparks by The Who when I was quite young. I asked for the first Head Hunters album for Christmas when I was around 12 or 13, and I remember thinking that it was the best thing ever.

Ben: It was this little plastic clarinet that was stored in a long tube rather than a normal case. I studied classical clarinet at school and never really felt much of a connection to it. In my teens I joined a local street band who gave me an alto (and later tenor) saxophone which really grabbed me and I taught myself those. That band was a great place to learn some musical skills. We were taught everything by ear, played some basic Latin percussion and were really encouraged to improvise.

Greg: It was an alto saxophone given to me by a local authority that gave music lessons in schools, and music clubs outside of school. It’s a shame that those sort of services are either practically non-existent, or don’t have enough funding to function properly, nowadays.

Ben: Not finishing things. Compositions, practice routines...I get distracted and move on to the next thing.

Greg: Not starting things, and focussing too much on mistakes.

Ben: You can make more of an impact by taking notes away than by adding them. I still struggle with the discipline to do it though.

Ben: I love The Brudenell Social Club in Leeds. It's our drinking haunt as well as an amazing independent venue. They get some amazing bands across loads of genres to play in a really intimate venue where everyone can afford the beer. Ideal. Honourable mentions also go to Ramsgate Music Hall and The Trades in Hebden Bridge.

Greg: Two venues that I really enjoyed playing at recently was Small Seeds in Huddersfield, which made me feel like was playing in the middle of the woods, and Norwich Arts Centre.

Ben: It's a toss-up between The Comet is Coming and The Moonlandingz.

What elements make up the Mansion of Snakes sound?

Ben: Since there are 12 of us in the band and the writing process is so collective, it automatically becomes a real melting pot. There's a lot of influence from Fela Kuti, Pharoah Sanders, Funkadelic, seventies ethio jazz, post-punk. It's not a calculated thing.

Greg: When we both first moved to Leeds there were bands like Ariya Astrobeat Arkestra, Ikestra and Nubiyan Twist that we saw all the time gigging around Leeds. It definitely helped inspire us to get the band going initially.

Greg: Probably the ones we haven't recorded yet. Our sound is developing as we write. And our new single Mating Season is a real departure from our first EP.

Ben: We're gearing up for festival season and finishing the writing for our next release.

Mansion of Snakes' Mating Season is out now on a split seven with Brooders. They play The Wardrobe's Africa-Brasil night in Leeds on 28 April.