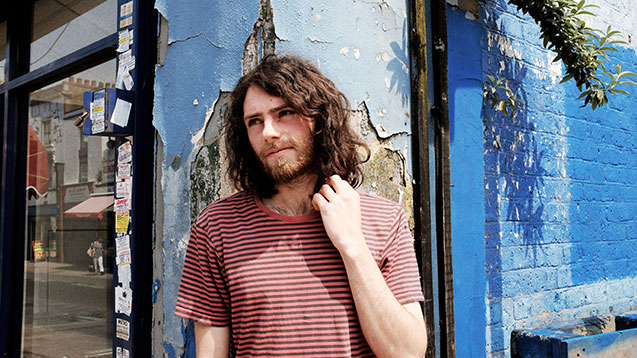 Laucan (real name Laurence Galpin) is responsible for one of the most dreamy debut albums of the year so far. We learn more ahead of the launch party next week...

Laucan (real name Laurence Galpin) is responsible for one of the most dreamy debut albums of the year so far.

Frames Per Second, which was released last month on Rob Da Bank’s Sunday Best label, finds the singer songwriter in fine fettle, as he gambles through the pastoral folk influences that drench his Sussex hometown of Lewes.

He initially began performing music with friends as part of an indie outlet, but the fallout inspired him to go it alone.

Swapping heavy guitars for a soft falsetto - and the countryside for London town -  his slow-paced sound layers textured guitars with electronic flourishes from Andrew Phillips, one half of Ninja Tune act Grasscut.

With Laurence officially launching the album next Tuesday (15 August) at The Waiting Room, London, we spent 30 seconds with him to learn what’s in store…

What was the first song you developed an obsession for?
I had an Oasis cassette single when I was seven or eight, D'You Know What I Mean? and Stay Young. I played that a lot. Stay Young was the one. I'm sure it's in my music somewhere!

What was the first gig you went to?
My parents took me to Suffolk and Good Festival in 1998 (a pun lost on me at the time). We saw John Martyn and Paul Brad,y who I later came to love, but I remember enjoying Papa Wemba and his 10 piece band.

What was the first instrument you ever got hold of?
My dad plays guitar so it was probably one of his.

What is your worst musical habit?
Putting up imaginary boundaries.

What’s the best piece of musical advice you’ve ever been given?
Identify the weirdest thing in the song and magnify it as much possible.

Where do you discover new music?
From talking to people and writing notes in my phone. Spotify related artists is quite useful too, and BBC Radio 6music.

What’s your favourite venue?
I'm keeping it a secret until I get to play there, but it's in London and effectively a giant hole in the ground.

Who is your current favourite band/artist?
Currently listening a lot to my friend (and PRS Foundation prize winner) Elsa Hewitt. She's an amazing producer and songwriter and I'm really happy to have her playing at our album launch on 15 August. She's released two albums this year already!

What inspirations outside of music impact your song writing?
Colours, flowers and vegetation, architecture and weather. And everything else.

What track of yours best represents your sound?
Up Tomorrow probably, it has a good mixture of acoustic instruments/field recordings/electronic bits. That's the one I'd play people first.

What’s next for you?
The album launch, some festivals and then heading out to Europe on tour with Sam Amidon! Lots to be excited about.