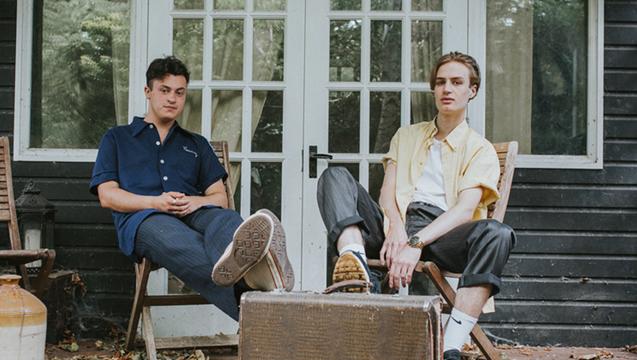 Sun drenched indie-pop duo KAWALA have a knack for hitting that melodic soft spot which makes them insuppressibly listenable.

Earlier in 2018 the pair released their debut EP D.I.L.Y.D, a gorgeous offering full of hypnotic guitar licks and lush vocal harmonies that at the time led us to dub them ‘Simon and Garfunkel for the Urban Outfitters generation’.

The pair met first at Leeds College of Music before deciding between themselves that uni wasn’t for them. Instead, they dropped out together and returned to London to start the band.

Shortly after came their first single Small Death, which was met with a chorus of approval from CLASH, Wonderland and BBC Radio 6 Music, and proved their move into music was going to be fruitful.

Now, following a run of sold out headline shows and smashing their summer festival dates at The Great Escape, Live At Leeds and Dot to Dot Festival, we grabbed a word with Dan McCarthy from the band...

I loved all sorts growing up from funk and soul, to punk and indie. But probably the first song I ever properly obsessed over was Marquee Moon by Television. 10 minutes solid of absolute joy.

I’m not sure if I can pinpoint the first ever gig I went to, but one from a young age that stands out, was going to see the White Stripes at ally pally. Couldn’t see a thing but I was blown away none the less.

It’s always been the guitar! I reckon I first started learning around age 10ish. I tried my hand at drumming for a while as I thought it was significantly cooler, before realising that holding an acoustic was (devastatingly) where I belonged.

Disappearing in to a world of horrifically obscure tunings when I write. Seems like a perfect idea at the time, until it comes to having to play them either live or even just remembering what on Earth tuning I had it in.

100% categorically being told by my A level music teacher that I simply wasn’t a good enough musician. It made me give up for a while, but eventually spurred me on to aim for world domination. And if we ever sell out the O2 one day, she’ll have a front row seat!

I find discovering new music increasingly difficult and I’m not sure why! One top way we find music, is to go to loads of free gigs all over London to see what magic up and coming hidden gems there are.

I love Moth Club in Hackney Central. If you haven’t been, it’s nothing like you’d expect. The definition of not judging a book by its’ cover. In terms of dream venue to play, it’d have to be Kentish Town forum. It’s a wonderful combo of being huge and conveniently round the corner.

In terms of new artists, I’m really in to a band called Men I Trust at the moment, and I'm a big fan of a local band we know called Island who are superb. In terms of an all timer, I’ve never been able to shrug my admiration for fellow north London band, Bombay Bicycle Club.

That’s a tough one! I reckon most often, it’s experiences happening to people we know that we use to inspire lyrics. In all honesty though, it’s mainly seeing and hearing other music that inspires us to write and explore different styles and rhythms.

Out now? Probably Funky, which is one of our oldest. A good blend of upbeat and rhythmic but still melodic and harmony based. I reckon our music will be best represented by what comes next!

More writing, more recording very soon, and hopefully building our notoriety as a band you HAVE to see live!