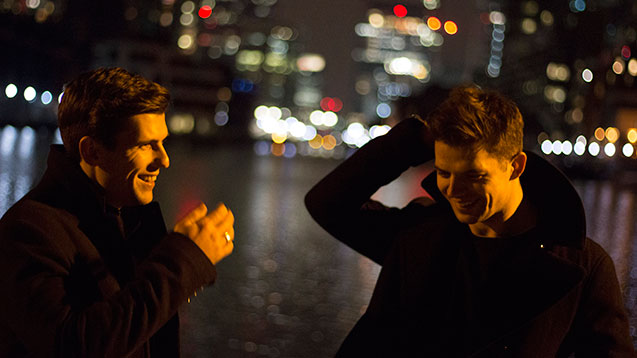 Synth-poppers JOYYA are a well-oiled duo specialising in anthemic slices of shimmering electronics. We catch up with one half of the outfit - Ben Dancer - to learn what makes him tick...

Formerly one half of Vinyl Jacket, the writer/producer pair – otherwise known as Ben Dancer and David Pullen – traded in harmonious pop-rock for clicks, smooth synths and lush guitar, creating a formula that’s already whetting the appetite of tastemakers up and down the country.

Their first two releases Seven and Red Tune (featuring John Waugh from The 1975) gathered support from the likes of BBC Introducing Newcastle, BBC Radio 6 Music, DIY and Record of the Day, and now, latest single Jericho looks set to build on that success.

Originally hailing from the small village of Wylam in Northumberland and now based in London, the pair spent nearly three years meticulously crafting their sound behind closed doors, inspired by their move to the bright lights of the capital.

Next up, they're set to release their track Walk Alone as a limited vinyl release, donating proceeds to CALM – a charity dedicated to preventing male suicide.

'It's a song we actually wrote together a couple of years ago, unknowingly, as a reaction to the frustrations we felt growing up with the pressures and expectations of "being a man",' they've said of the track.

Enthralled by their sleek production and sun-drenched hooks, we caught up with Ben to find out what makes him tick...

What was the first song you developed an obsession for?
Mike and The Mechanics - Over My Shoulder.

What’s the first gig you went to?
The Darkness at Telewest Arena, Newcastle

What’s the first instrument you ever got hold of?
Piano.

What is your worst musical habit?
Writing complex grooves that nobody cares about.

What’s the best piece of musical advice you’ve ever been given?
Keep working at the song until it moves you. If it doesn’t make you feel something, you can’t expect it to do the same for somebody else.

Where do you discover new music?
Spotify or friends.

Who is your current favourite band/artist?
Rationale.

What inspirations outside of music impact your songwriting?
Living in London (we’re from Newcastle), masculinity, relationships, happiness.

What track of yours best represents your sound?
Horizon (out 7 May 2018).

What’s next for you?
We’re releasing a limited edition run of vinyl for our song Walk Alone to raise money for CALM (a charity focused on male suicide prevention and tackling harmful cultural norms around what it means to be a man), plus running the Hackney Half for them. We’re also releasing our two favourite songs and gearing up for festivals.