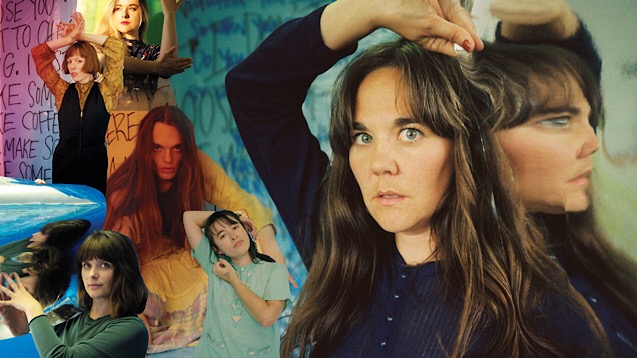 Xylophones, choral hymns and trippy multi-layered chants: Jenny Moore's Mystic Business is choral-punk like no other. We catch up to find out what's next for the ensemble...

Xylophones, choral hymns and trippy multi-layered chants: Jenny Moore's Mystic Business has created a choral-punk album like no other.

Originally formed in 2016 for an art and music acoustic festival in Cambridge, the troupe came together to record the results just three days later. Track titles like Sandwiches, The Internet and We Want Our Bodies Back give an idea of the record's eclectic intention: everything from Mini Cheddars to feminist philosophy is up for grabs.

Tear Things Up is the latest track to be shared, and it's a warm and intimate offering that sounds almost like you're in the room with the singers. Built around a repeated mantra, it's a reminder of the shared sonic power of many voices, as it expertly builds into a mind-warping crescendo.

Ahead of the album's launch party on 4 December at London's Servant Jazz Quarters, we caught up with Jenny to discover the inner-workings of her musical mind...

Straight Up by Paula Abdul or We Didn't Start the Fire by Billy Joel. Which says a lot about my parents' record collection.

My dad is a musician (singer, guitarist, started as a bass player) and, as legend goes, my first gigs were his. I was about two years old and I tripped up a set of concrete steps, knocking all my baby teeth back up into my gums. I've been pretty hardcore since the beginning.

Totally obsessed with the xylophones in primary school music lessons, which have joyfully come back around into my current set-up!

Talking too much in between songs or nervously highlighting mistakes - like looking around with a big old 'SORRRRRY' grin on my face after the last beat of the song. I used to do this a lot but lately I've become much more accepting of my anti-methods and wrong-techniques. It finally occurred to me - this is really working for me, I'm finding a voice and making songs and the 'mistakes' are often just magic.

To listen to your body. This wasn't given to me as musical advice per se but it's a powerful tool. If and when I trust it, my body always knows where its strength is, how to move through a rhythm, and how to access the weirdness that is my internal self.

I'm a pretty big internet nerd, I spend a lot of time clicking on random Bandcamp links, and follow up on bands I've heard people chat about. I love the 'suggested for you' bit of YouTube. It's so weird.

Total Refreshment Centre in London. It's been a really open, warm, generous, and adventurous place for musicians. I've recorded and rehearsed there, played loads of gigs and thrown some serious shapes deep in the night. They're no longer doing gigs there because London is a cruel beast and our current political climate is choosing money over creative exploration but they've given a lot of us a good time. (Long live TRC).

I love the new John Grant album, Love is Magic, the new Planningtorock album Powerhouse and Virginia Wing's record, Ecstatic Arrow. Seeing those album titles side by side is a bit revealing re: my current mindset - intense emotions, the supernatural, strong stances and sharp shooting.

Novels (The Water Cure by Sophie Mackintosh - so good), The Daily (New York Times podcast about American politics - so terrifying), the feeling a landscape leaves in your bones (the Canadian prairies - so sublime).

This one's hard because I sort of think of this whole album as one track; an epic eight-act song. For the sake of cooperation though, I'll choose the title track, Mystic Business because it moves through many sounds - from the long chant at the start, to the choral centre, to the stadium rock middle, and finally with a soulful refrain at the end that hinges on a drumbeat I nicked from The Fugees.

So much. The album launch gig is planned for 4 December at Servant Jazz Quarters in London. We're going to play the whole album and few new specials, with a massive ensemble of 12 people! I'm also working on a choral mash-up of the old Florence Reece protest song Which Side Are You On and a Purcell piece from 1691, just to shake things up! It will premiere at London Contemporary Music Festival on 12 December, performed by the experimental choral collective Musarc. Then, hibernation for the holidays. Then, tour.

Jenny Moore's Mystic Business is out now via The Audacious Art Experiment.
New Music
Back to top