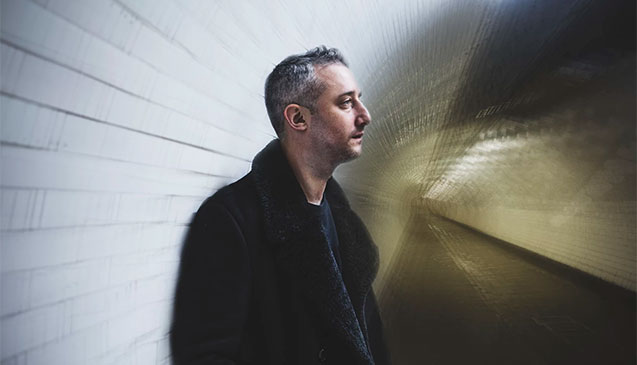 Post-classical pianist James Heather seemingly arrived from nowhere earlier this year, with his debut EP Modulations. We get the skinny on his musical beginnings away from the spotlight...

Each of its seven tracks echo the perfect poise of contemporaries Max Richter or Nils Frahm, adding a little extra British introspection with its vaporous chords and minimal melodies.

The set has already racked up more than one million plays on Spotify, won him praise from critics across the national press and bagged him a debut slot at Glastonbury Festival this summer.

But James’ musical beginnings are rooted in his distant childhood where, under his grandfather’s tutelage, he began learning – and then unlearning – the classical rules of engagement.

As a teenager, he was drawn to the more experimental side of electronic, classical and popular music, while his 14 years spent working as a publicist at Ninja Tune have further fuelled his eclectic palette.

Now with his debut album, Stories From Far Away on Piano, out in the world, we spend 30 seconds with James to learn more about his inspirations and influences…

What was the first song you developed an obsession for?
When I was in first school in the eighties I was obsessed by things like A-ha’s Hunting High and Low and anything by Prefab Sprout. The first cassette I opened up in my room was by Tinata Tikaram, it was called Ancient Heart. The first seven-inch I bought was The Bangles’ Manic Monday. I was obsessed with melody and these tunes would be my guilty pleasures! I also used to listen to Beethhoven piano sonatas at night, just before I got into more contemporary experimental music.

What’s the first gig you went to?
I think it might have been around the age of 15. My dad drove me and my brother and his mates to Reading Festival for his 18th birthday for the day. I remember losing everyone and finding a group of people around a campfire in view of the main stage. After an hour delay, Neil Young came on with a backing band of Pearl Jam. I have no idea how I found my family again and got back to Southampton, pre-mobile phones and all that!

What’s the first instrument you ever got hold of?
Before the family got a piano when I was about 10, I tried to learn the trombone (too loud for the house), the clarinet (got confused as it was two semi-tones down) and the guitar (I wasn’t as good as my brother and tuning was complicated). But once I got on the piano it all just clicked!

What is your worst musical habit?
I guess my worst and best is the fact I basically just play my own music. Cover versions are useful things especially when no one knows your songs, so I do know a few now!

What’s the best piece of musical advice you’ve ever been given?
My grandad taught me that in composition it doesn’t matter what key you are playing in, there are three types of chords that will always work (tonic, dominant and sub-dominant). He taught me how to move between the keys and also what chords complement those three chords well. Some more rules were introduced by him from a classical standpoint, but once I got a basic foundation I basically tried to break them all and find my own sound!

Where do you discover new music?
I’m obsessed by playlists on Spotify and Apple etc and beyond. This harks back to the nineties where I would always be making themed playlists onto cassette tapes for friends and girls!

What’s your favourite venue?
In Southampton I would say The Joiners is special, as I saw some of my first live bands there, and also spent some of my first clubbing experiences; listening to Orbital’s Satan felt like the most rebellious thing! Shout out to Nexus too, which is now knocked down. In London you can’t look much further than the Roundhouse for a live band, helped by the fact they also have such a good community spirit, and also The Barbican for something more suitable for sitting down!

Who is your current favourite band/artist?
Ok, just looking at LastFM and who I have listened to the most in the last three months: 1) Micachu 2) Dizzee Rascal 3) Hiatus 4) Besarinn Quartett 5) Alice Coltrane.

What inspirations outside of music impact your songwriting?
Philosophy, love, spirituality, world affairs, history, space travel and a break for Match of the Day!

What track of yours best represents your sound?
I would say Empire Sounds is the best representation of different styles and also where the sound might go.

What’s next for you?
I’m going to put my head in the ground like an ostrich, just for a little bit, and have a think about progressing my art and the next chapter. In the meantime I’ll be doing some gigs, just me and a piano for now.

James Heather - Stories From Far Away on Piano is out now via Ninja Tunes imprint Ahead Of Our Time.

https://soundcloud.com/ahead_of_our_time/sets/james-heather-stories-from-far
New Music
Back to top