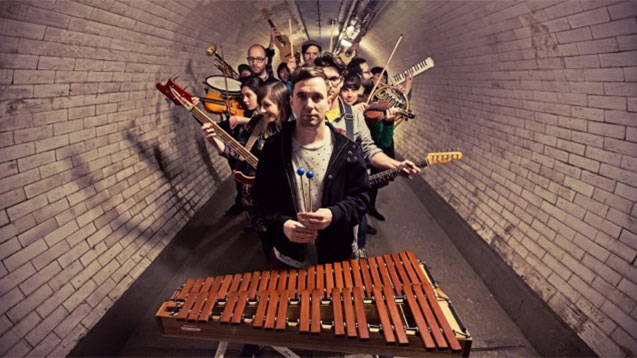 If ecstatic electronics, orchestral theatrics and pounding punk get your ears doing cartwheels, then 16-piece post-rock collective Human Pyramids are for you. Don't miss the new LP...

If ecstatic electronics, orchestral theatrics and pounding punk get your ears doing cartwheels, then 16-piece post-rock collective Human Pyramids are for you.

The brainchild of Glasgow-based composer Paul Russell and instrumental experimentalists Axes, Human Pyramids offer a jubilant new take on what guitars, drums, electronics, brass and strings can do together.

Raised in an old mining village in the central belt of Scotland, Paul established the orchestra in 2011 and put together their intricate debut album Planet Shhh! three years later.

The genre-bending set received glowing reviews across national press and BBC 6 Radio Music, and went on to soundtrack scores of documentaries, films and adverts.

Now back with a new album, Home, which dropped on Friday, they’re continuing in a similar off-the-wall vein, with flutes, violas and trumpets combining to form a kaleidoscope of psychedelic sound.

What was the first song you developed an obsession for?
The first band I remember being obsessed with was Nirvana. I was blessed with a super-cool big sister, who let me listen to her tapes and taught me Come As You Are on the guitar. I would have been eight years old and was smitten. Complete with over-sized jumper and holes for the thumbs.

What’s the first gig you went to?
My first gig was The Wildhearts at the Queens Hall in Edinburgh. I remember they opened up with Greetings from Shitsville and they swapped the words from London to Edinburgh and it blew my mind.  I remember buying a PHUQ T-Shirt that must have been an XXL and it came down to my knees.

What’s the first instrument you ever got hold of?
There were always lots of instruments in our house; acoustic guitars (nylon and steel), mandolins, mouth organs and an old piano in the living room.  My first guitar was a 3/4 length classical nylon acoustic guitar.  Though my first proper (electric guitar) was found by my best friend in a skip and me and my dad fitted it with some Lace Senser pickups (because that's what Billy Corgan used) and painted it electric blue.

What is your worst musical habit?
Lots of bad musical habits, but the two main ones are: never practising and never finishing anything!

What’s the best piece of musical advice you’ve ever been given?
On my first day at Jewel & Esk Valley College (HND in Modern Musicianship) the tutor said to us: 'The music industry is very fickle and the only way to survive is to diversify.'

It was a great course and covered instrumental lessons, sound engineering, law, composition and music theory. Since leaving I have worked as a sound engineer, producer, composer and musician, and always had something bubbling away!

Where do you discover new music?
Quite a few different places... recommendations from friends, or while cooking in the kitchen with BB Radio 6 Music, the algorithms at Spotify have come up with some belters (and some crap!).

Alongside this, I try to listen to everything on certain lists, such as the Scottish Album of the Year Awards, Mercury Music Prize etc. And I also follow a few labels with a keen eye and see what they are releasing, including 4AD, Full Time Hobby and FatCat.

What’s your favourite venue?
The Lexington in London. Our album release show was there - it is the perfect size. Nice big stage, fantastic sound and no matter where you are in the room you can see really well.  Oh, and they have amazing burgers and a fine selection of beers..

Who is your current favourite band/artist?
So many! But new album releases I am currently enjoying include Dirty Projectors, White Denim and Anna Meredith.

What inspirations outside of music impact your songwriting?
I always get very inspired when I am out of the city. The Scottish Highlands or the Welsh Quarries. The rain on the roof of the car or the wind on your face.

What track of yours best represents your sound?
Our new single Crackle Pop.  It encapsulates the atmosphere of the new album perfectly; orchestral, energetic and a wee bit unhinged!

What’s next for you?
I have been working on a piece of software called Chance, which is a MIDI instrument that generates music randomly. Controlled or Quasi Random might be more accurate - it uses probability schemes that favour the first, fourth and fifth (or not as the case may be!) and can work in monophony, unison, harmony or polyphony.

I am also writing a cinematic sample library with lots of lush guitar pads, a dystopian trailer music album with lots of terrifying textures and I plan to write for woodwinds soon - the one side of the orchestra I have neglected. So that seems a good place to go next!