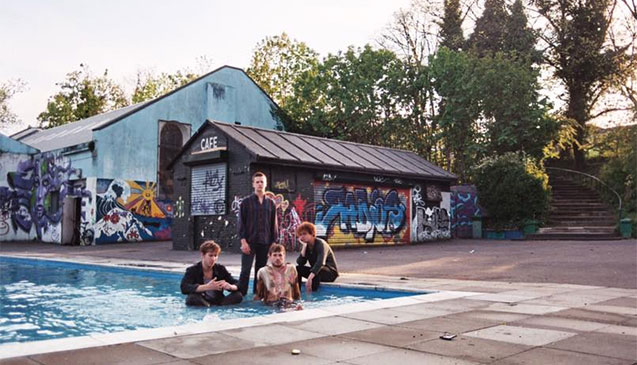 ‘It’s about what you leave out’: Hot Dreams' Kai Fennel lets us in on the best piece of advice he’s ever been given and how his late cat Memo has become his muse…

Only just out the blocks, they’ve got three tracks out in the world at the moment, with more in the pipeline for the spring - but things are already looking rosy.

Their latest is the standout Another Night, which opens with shimmering guitars and vocals, gently building out to gut-wrenching proportions thanks to lead singer Kai Fennel’s soothing vocals.

No surprise then that BBC Radio 1 tastemaking supremo Annie Mac is already on board, with Radio X and BBC Introducing London also pledging early support.

Here, Kai lets us in on the best piece of advice he’s ever been given and how his late cat Memo has become his muse…

Smells Like Teen Spirit by Nirvana. I used to tie my dressing gown cord to my baseball bat and jump around on my bed pretending to be Kurt Cobain.

The Wombats at Brixton Academy, I must have been 12 or 13 at the time.

Guitar was the first instrument I picked up. I got bought my first electric guitar when I was 10 and when I turned 13 I heard that Jimi Hendrix painted his guitar with nail varnish, so I decided to do the same and painted my band’s name at the time (Pleasure 69) in huge letters. Kinda wish I kept it now.

The fact that I have no idea what I’m playing.

‘It’s about what you leave out’ - Billy Fyall.

I use Spotify mainly, but also Hype Machine. My sister is also good at finding new music so we tend to share a lot of what we find.

I’d have to say Alexandra Palace. I love the festival atmosphere it has.

I can’t stop listening to Japanese Breakfast at the moment. Her voice is so lovable. Listen to the song Boyish.

Friends, family, the weather and my cat Memo. RIP

Our new single Another Night.

We’ll be releasing our debut EP this year and continue to play shows around the releases. We’ve spent a while writing and recording these songs so we’re looking forward to getting out there and playing them live.