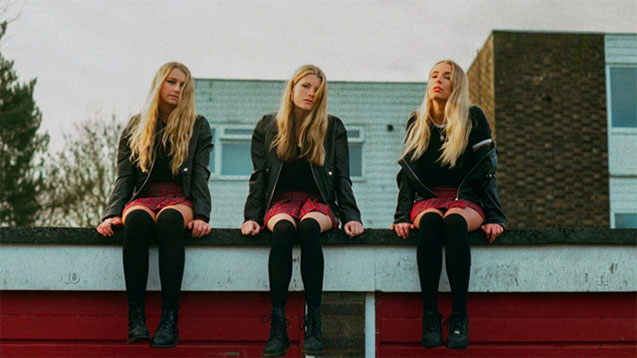 Made up of Lizz (guitar/vocals), Sophie (bass/vocals) and Lauren (drums/backing vocals), the London-based band arrived with a bang last year after unveiling their debut single, Hey, produced by Spring King's Tarek Musa.

Since then, they've been slaying venues all over, picking up tour slots with the likes of American rock legends All Time Low and attracting support from PRS Foundation’s Women Make Music, BBC Introducing and Kerrang Radio.

Theirs is a sound that is defiantly keeping rock 'n' roll alive and well in 2018, brimming with anthemic chorus', crashing drums and mosh-worthy guitars – all topped with syrupy harmonies that elevate the songs to grunge-pop perfection.

With latest track Love Machine out now and a summer of festivals ahead of them, we caught up with Sophie to get the skinny...

I remember being about seven years old and driving to school every morning hearing R Kelly's Ignition on the radio. I kinda got obsessed cos I didn’t really understand all this singing about being in the kitchen but I thought it was cool and badass to be seven and singing along to ‘sippin on coke and rum, I’m like so what I’m drunk?’ (Just for the record I wasn’t drunk, I was seven and my mum was driving, not me…).

When I was 11 I went in a pink limo for my BFF's birthday to see Kylie Minogue in Birmingham. It was awesome.

Probably a recorder when I was at school. I could play a really squeaky version of Hot Cross Buns, which made me pretty happy at the time.

Probably not warming up enough before a show. I’ve somehow got confused and personally think the phrases ‘warming up’ and ‘having a shot’ sound pretty similar.

‘It’s a long way to the top if you wanna rock n roll’ (never give up).

My little brother used to make me CD’s (he has way better taste than me). Now it’s Spotify or Lizz makes me playlists. We also meet a lot of cool new bands when we’re out and about.

I love Koko! It was one of the first venues I went to when I first moved to London and it has a magical vibe I can’t explain.

Most ideas come to me on the mind-numbingly dull walk I have to do every day between my flat and the tube station.

For me it’s our most recent single Love Machine. It comes across really energetic on the recorded track which if you come see us live, you’ll realise is what we’re all about.

We’re gunna carrying on releasing new music so keep your eyes and ears peeled! We’re hitting the festival circuit playing a load of awesome festivals (and praying for the sun).

5 May - Live At Leeds, Leeds
6 May - Liverpool Sound City, Liverpool
26 May - Neighbourhood Weekender, Warrington
New Music
Back to top
Close