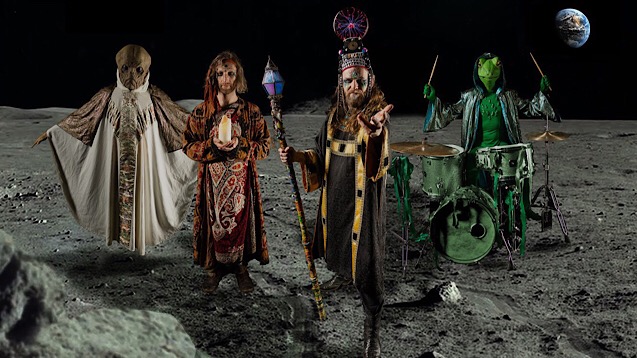 Enter the weird and wacky world of intergalactic electro-prog rockers Henge, who 'come in the name of rave to spread their message of love and harmony.'

Let's address the elephant in the room, shall we: electro-prog rockers Henge are not your average band. For starters, there's the fact that they're aliens...

Led by founder, vocalist and guitarist Zpor, who sings of his space travels, the intergalactic four-piece 'come in the name of rave to spread their message of love and harmony.'

Crafting an interplanetary sound dubbed 'cosmic dross', the quartet have fast established themselves as an unmissable festival act and the accolades have followed: in November, they bagged Live Act of the Year at the Independent Festival Awards 2018.

It all adds up to an addictive wigged-out concoction that's weird, wonky and loads of fun.

With their 18-date UK tour wrapping up this week (see below for remaining shows), we caught up with Zpor to discover more about Henge's sonic universe...

I became captivated with the sounds of cosmic dross when I was but a youngling on Agricular in Cosmos Redshift 7. My consciousnesses assimilated these sacred frequencies and they have stayed alive within me throughout my billions of years of existence.

I was a regular in the gloop joints where many great musicians of the Agriculan second age of enlightenment transmitted cosmic dross for the joyful edification of the patrons. These wise and silly musicians became my friends and eventually my mentors.

A type of Agriculan organ. Similar things can be found on Earth. Often, once picked up, many humans find it too hard to put away.

I dance so much that I run out of breath. I am still adjusting to the atmosphere on Planet Earth...

The best place for discovering new music is at festivals and such gatherings.

The Underwater Palace on Xylanthia in the Sirius Star System.

There are a few... The Evil Usses, Paddy Steer, Felix Kubin.

A good place to start is the first track of Attention Earth! - Mushroom One.

We are celebrating the release of our album Attention Earth! with some very special shows at Gorilla in Manchester on 8 December. There will be a family-orientated matinee performance that is open to all ages and a more rowdy evening show for those aged 14 and over. This also marks the end of our UK tour, during which we have witnessed the successful transmission of cosmic dross throughout the United Kingdom, and a proliferation of joy among humans.