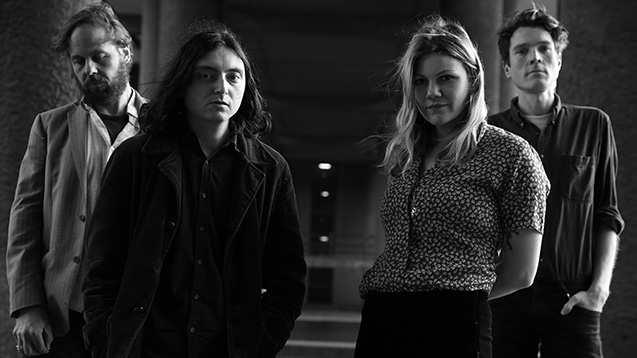 London-based, Anglo-Australian quartet H. Grimace serve up an exhilarating slice of post-punk tinged rock that is as artfully restrained as it is raw and impassioned.

London-based, Anglo-Australian quartet H. Grimace serve up an exhilarating slice of post-punk tinged rock that is as artfully restrained as it is raw and impassioned.

Formed in 2011, the band honed their sound with several EP releases before putting out their debut album, Self Architect, in April this year via Opposite Number.

It's a self-assured nugget of a record that has won them rave reviews, and rightfully so: it pulsates with a Sonic Youth-esque texture that builds and crashes its way through 10 tracks led by vocalist/guitarist Hannah Gledhill, whose gripping vocal contains more than a hint of Kim Gordon.

Lyrically, the album centers on identity and social pressures, executed to compelling effect on 2.1 Woman: a powerful spoken-word piece featuring poet Vivienne Griffin who tears apart the expectations and contradictions of womanhood.

With supporters including Lauren Laverne and Andrew Weatherall, the band look set to build on their status as ones to watch.

Ahead of their performance on the Green Man Festival rising stage this Saturday (19 August), we caught up with Hannah to find out everything from first gigs to getting musical advice from a punk legend...

What was the first song you developed an obsession for?
Pavement's rather silly single Carrot Rope, I was about 15 and it was way different to stuff I had been exposed to. I just found it so kooky and dynamic, something I loved.

What’s the first gig you went to?
East 17 in Manchester. I had never seen anything like it, teenage hysteria.

What’s the first instrument you ever got hold of?
Clarinet as my mum said we couldn't get a piano in the house!

What is your worst musical habit?
Ha I should let my band mates answer that. Probably being totally retentive over absolute minutia...

What’s the best piece of musical advice you’ve ever been given?
Well... Viv Albertine (name drop) once said to me just keep going with it, as you will only get better and you will be more likely to succeed with it!

Where do you discover new music?
Work (constantly we have music on), friends, cafes have pretty good tunes on these days. Punk compilations from Rough Trade keep me buzzed on the old stuff. Oh and certain record labels I keep an eye on.

What’s your favourite venue?
In Glasgow, The Old Hairdresser's.

Who is your current favourite band/artist?
This is an oldie but I only just discovered him: Blixa Bargeld from Einstürzende Neubauten. We recently saw them in Sicily and their live set blew me away! It was artistic, beautiful, unpredictable, creepy – all the stuff I like!

What inspirations outside of music impact your songwriting?
Well life is a constant resource, art for me is always a channel. I like to approach each song as I might an artwork; it has to explore some ideas.

What track of yours best represents your sound?
I think 2.1 woman, it has our repertoire of styles in it and it's a creative collaboration which I'm proud of.

What’s next for you?
Some more collaboration I hope and just get cracking with the second album.