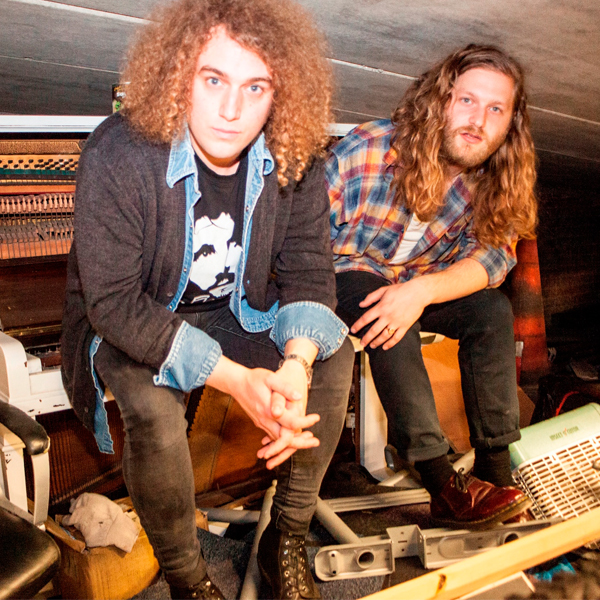 Two piece God Damn make music as punchy as their name, a double jab to the ear of visceral, heavy rock. Get your ears ready for the pummelling racket of their debut LP Vultures…

God Damn make a pummelling racket almost as aggressive and as punchy as their name.

Using a swear word for your band moniker is quite the statement of intent but this heavy rock duo - made up of Thom Edward (guitar/vocals) and Ash Weaver (drums) - clearly aren’t ones to shy away from saying (or shouting) anything.

The pair, originally from Wolverhampton, have spent the last three years perfecting their visceral, high energy live shows, blending barbed guitars and sharp drumming. The live experience is pretty devastating but while they’re notorious for volume, they’re also kings of the dynamics, puncturing their music with moments of melody and melancholy among the assault.

Debut album Vultures, due for release in May via One Little Indian, sets the band’s stall out over 13 songs, then gives it a good kicking via large dollops of intense psychedelia and guitar heavy sludge. They’ll be bringing their noise to the SXSW Festival in Texas, as well as joining cult Irish rockers Therapy? in Europe and headlining their own UK tour in May, then finally combusting at the Download Festival in June. This is punk rock in the truest sense of the words - prepare your ears for God Damn now…

We first started writing music because…
Thom: One of my earliest memories was singing a little song I'd made as a toddler in nursery. A few years ago when I actually became a nursery teacher I found out that's a natural progression for many children so nothing too remarkable. But I can honestly say I've never learnt to play someone else's song properly. I just end up going completely off topic and writing one of my own. I was in a band before I could play a song and now have been in one for over half my life.

Ash: I played drums from an early age and, even before that, I can remember playing on pots and pans, or anything I could get hold of. So playing in a band was something I wanted to do from a young age. It was a way of getting all these beats and techniques out of my system and putting them to use.

We have been making music since…
A: I have played drums since I was eight, but I think my first 'rock' band was when I was about 13 or 14. I have made music with Thom now for over eight years and have never looked back.

T: I first started playing guitar at 13, completely ruining my studies and any interest in anything else. I can remember seeing Ash play at a pub up the road from where I now live and it was love at first fright! We've played in various line-ups together over the years.

Our music is…
A: Heavy and soft, loud and quiet - you will get it when you listen.

T: I like to think that we've forged a basis for a band in which we can do whatever we want dynamically. It can flip from being very intense, scuzzy and heavy to very quiet and sombre. Punk and rock in its true sentiment really.

You'll like our music if you listen to...
A: For me, I would say Queens of the Stones Age, Nirvana, The Mars Volta and later period Arctic Monkeys.

T: I'd agree with those but would also like to add in the Melvins, Jesus Lizard, Smashing Pumpkins, Electric Wizard, the Pixies, Neutral Milk Hotel, Tom Waits, Marilyn Manson and Lightning Bolt for good measure.

Our favourite venue is…
A: I'm going to chicken out of this one. I can't really choose, it depends on the atmosphere on the night.

T: I concur, we have too many favourites. I'm gonna throw in a curveball and say house parties, yeah, someone's front room.

Music is important because…
A: It's a way of creating so many different emotions, and getting parts of your personality across that you couldn't do in any other way.

T: What an answer Ash! Nailed it. I like to think when writing a unique song/painting/sound/creative output you are putting out a new, previously unknown emotion and that's an important thing, even if it just has an influence on one person.

Our biggest inspiration is…
A: As a drummer, Pete Boot, he played with Budgie in the seventies and he's a great friend of mine, he has taught me most of what I know. Unfortunately, he has Parkinson's, but it still doesn't stop him, he always has a smile on his face and can still rattle those skins. As a band, I would say Zeppelin or the Beatles.

T: I'm going to say my grandad Martyn, he's still singing in his choir and he's 85. So far as the mainstream, I'm always after genuine people who don't do what is expected of them and what the hell they want ... Zappa, Waits, Morrissey, Patton.

Our dream collaboration would be…
A: Mine would be the remaining members or Zep, or Queens of the Stone Age. Billy Joel would always be a good one for me too, I was brought up watching this video of him, and his drummer at the time Liberty Devitto. It’s one of the main reasons I wanted to play drums.

T: Any of the artists I've mentioned so far, although I'd probably end up thinking/realising they were an idiot or an egomaniac after working with them. Keep meaning to get my grandad on a record.

To try us out, listen to my song…
A: Our latest single When The Wind Blows.

T: Yep, if you're after something with a little more depth, maybe Skeletons or our album title track Vultures.

If we weren’t making music we’d be…
T: Before we signed our record deal I was a primary school teacher, I'd probably go back into that for a while or teaching special needs, I'd always be doing the music as well as whatever I'm doing. Probably be able to get a dog as well.

A: Working in a shop full time, I reckon, which was what I did before. Probably hoping to have my own drum shop or something one day, which I would still like to do anyway at some point.

In 10 years’ time we want to be...
A: Still making music I believe in and hopefully further forward in my music career, with more people following us and loving what we do.

T: Hopefully 10 years wiser, experienced and not bitter about it one bit. Still making the music I want to and paying the bills, a big ask but I'll give it my best shot.