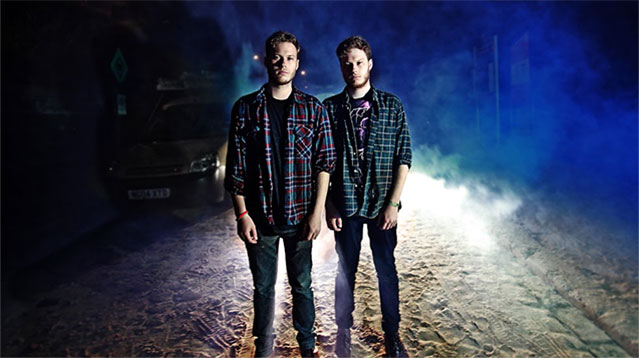 If massive riffs and killer choruses are your jam, then Geordie twin-set Gallery Circus are bound to tickle your ears. Don't miss the new EP, Chi-Town Dogs, out this week via Killing Moon...

If massive riffs and killer choruses are your jam, then Geordie twin-set Gallery Circus are bound to tickle your ears.

The identical brothers Daniel and Graeme Ross have been playing together since they were toddlers, amassing an enormous sound while entertaining their parents in the front room with Status Quo covers.

Like The Futureheads jamming with Royal Blood, they take the angular aspects of the post-millennial Tyneside sound and mash it up with that crashing old school rock sensibility.

A thumbs up from BBC Radio 1’s Huw Stephens has already marked them out, while new EP, Chi-Town Dogs, produced by Dan Austin (Pixies, Doves), is bound to bring them to the masses.

Out today (4 August), it’s an adrenalin-charged ride that gallantly captures their live chemistry and bellowing sound.

Below, Dan takes us behind the Gallery Circus curtain…

What was the first song you developed an obsession for?
Beetlebum by Blur. It was the first single Dan and I bought when we were seven years old. We discovered the track on a HMV listening post and became infatuated with the intro guitar riff.

I was blown away by the fuzziness - it sounded like a motorbike to my innocent mind. That song definitely had a huge influence on the tones we try and get out of our amps.

What's the first gig you went to?
I think it was The Futureheads at Newcastle University when we were in our second last year of secondary school. The North East had so many great bands during the mid-00s, the music scene was completely buzzing. Maximo Park and Field Music were particular favorites of ours. In a way, I guess they helped to formulate our sound.

What's the first instrument you ever got hold of?
We both started learning to play pretty early in our childhood. At age six our parents finally gave in to our constant nagging - we desperately wanted a drum set and guitar. Our first shows involved us playing Status Quo covers to our parents in the living room.

What is your worst musical habit?
Graeme can often get carried away with crazy drumming live. I have to keep him in check and make sure he still keeps the pulse of the song and doesn't mess up via angry onstage glances!

What's the best piece of musical advice you've ever been given?
Keeping things simple is often the best way. Oh, and dynamics is the key to volume: if you want your choruses louder, play your verses quieter.

Where do you discover new music?
Recommendations from friends and other bands we have played shows with are key ways we discover great new music to check out.

When I'm bored, I find there's nothing better to do that to get lost in Spotify and stumble upon something truly inspiring.

What's your favourite venue?
We love playing a little venue in Tynemouth called the Surf Cafe. It's a really cool independent cafe shack that has started putting on some great bands.

It only holds around 80 people, so playing a packed out show there is really intimate and great fun. We try and play there on our birthday every year, it's become a tradition for us.

Who is your current favourite band/artist?
I love Dr Dog. They have a totally different sound to ours, kind of psychedelic rock. They've got great melodies and are always inventive with the tones and textures they put on record.

What inspirations outside of music impact your songwriting?
A lot of our music tells stories we've experienced over the years as twins living in the States and the UK - from accidentally burning buildings down, escaping the Chicago police department on rooftops to breaking out of a smoke-filled building in Stoke.

What track of yours best represents your sound?
The title track from our EP, Chi-Town Dogs, probably demonstrates a little bit of all the different ingredients we love to showcase live: massive riffs, occasional piano and quirky rhythms.

What's next for you?
We may hit the studio again before the year is out - we have loads of new tracks we really want to tape.