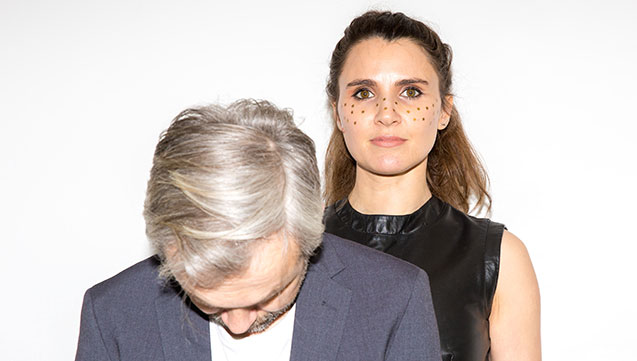 Bilingual Brighton-based duo Frost join the dots between glacial electronics and transcendental synth-pop. Get under the skin of their sultry sound ahead of the release of their debut LP, Matters

A collaboration between French-Swedish sound artist Johanna Bramli (vocalist for Stereolab offshoot Imitation Electric Piano) and Fujiya & Miyagi’s Steve Lewis, their sound carries all the hallmarks of past endeavours.

With charity shop synths and xylophone solos rising up gently from layers of ambient swirl, it’s a gentle trip that sits somewhere between Stereolab and Silver Apples.

Ahead of their debut album, Matters, which drops on 28 September, we get under the skin of their sultry soundworld…

Jo: Everything In Its Right Place off Radiohead’s Kid A. It’s one of those tracks where I thought, ‘You can do this with music?!’ The mix of styles, contemporary classical influence, its simplicity and repetition, the incredible processing of vocals - wow! An electronic song in its purest form and a turning point for me where I found the musical direction I wanted to take where pop meets the experimental.

Steve: Oliver’s Army by Elvis Costello and The Attractions. I was about six years old and guess I must have been drawn to that ridiculously catchy chorus. I played that record to death and must have driven my parents crazy.

Jo: It was New Kids on the Block in Forest National in Belgium and I was VERY young. I went with my mum. I was probably the youngest person there and a group of ‘older’ girls at the show took me under their wings, lifted me up so I could see etc... It was exhilarating! I think the first gig I went to on my own was The Prodigy at the same venue.

Steve: The very first gig would have been with my family to see Lou Rawls in Vancouver in the mid eighties but to be honest I can’t remember much about it. My first gig with friends was Soup Dragons and Teenage Fanclub at what was the Town and Country Club in London, 1990. That’s where I first discovered the fun of being in a mosh pit.

Jo: I played the xylophone for years… I was part of this kids’ national ensemble back in Belgium. We may have used xylophone on a track or two on the Frost album…

Steve: It would have been one of those classic eighties Casio keyboards.

Jo: Low and low-mids overload in all of my mixes…

Steve: Listening to a drum loop over and over and convincing myself the high hats need to be tweaked.

Jo: ‘Stop over-thinking, just get it out.’

Steve: ‘Get your record finished or you’ve got no chance.’

Steve: Mostly through friends’ recommendations but also BBC Radio 6 Music, Spotify and blogs like The Quietus and 20jazzfunkgreats.

Jo: In Brighton, I love The Prince Albert, such a cosy venue with brilliant sound. Recently saw Bitchin’ Bajas there which was mesmerising and super-intimate.

Jo: Everything and anything from an overheard conversation on the bus to the rhythmical sound of my washing machine.

Jo: Probably Crackling on the Wire. It blends elements of krautrock, techno, ethereal vocals and sound manipulation. Where our softness meets our hard punching sound.

Jo: Our debut album Matters is out 28 September on Lost Room Records and we’ll be doing a few shows around then too.