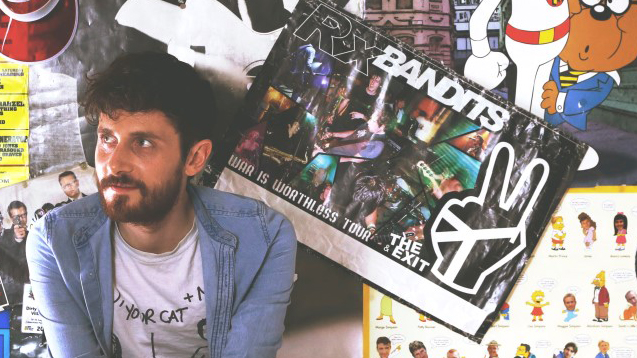 Frank Hamilton makes the kind of honest, accessible songs that have won him an army of fans, following #OneSongaWeek, a project which saw him pen a tune a week for a year...

Frank Hamilton makes the kind of honest, accessible songs that have won him an army of fans, following #OneSongaWeek, a project which saw him pen a tune a week for a year.

His musical career began life in his living room and ended with this number one album on iTunes, featuring the likes of Ed Sheeran, Newton Faulkner, Josephine from Oh Wonder and Lauren Aquilina. The Best of album was released in December 2012 on Frank’s own label with a marketing budget of £0 and has since sold well over 15,000 copies.

What else has he achieved? Well since then Frank has sold out two headline UK tours and performed at the likes of The Great Escape, Secret Garden Party, and British Summer Time Festival. Now he’s just released his latest studio album, a collection of upbeat guitar tunes entitled Songs To Make Life Slightly Less Awkward. The man himself describes the release as a ‘self help guide masquerading as an indie pop record’ ... get to know him a little better by spending 30 seconds with him below...

I first started writing music because…
Blink 182 summed up my life in three minutes and it blew my mind.

I have been making music since…
I've been old enough to sing and hit things, but I've been writing songs for around a decade.

My music is…
Really honest.

You'll like my music if you listen to...
...white noise for 30 minutes beforehand. (seriously, I'll sound great).

My favourite venue is…
Maybe Bush Hall? I saw The Crimea do a Christmas show there a few years back and was lucky enough to do the same last year. This year the Christmas show's at Scala, which is nice/scary.

Music is important because…
Music makes memories, memories make music. It can also help you understand things (like yourself) a little better.

My biggest inspiration is…
I find this sort of question really hard. There are so many ... and in so many different areas of life, not just music. In a songwriting sense I guess people like Adam Duritz (Counting Crows), Davey McManus (The Crimea), Mike Skinner (The Streets) and Jarvis Cocker (Pulp). Anyone who's written a song that's helped me understand things (like myself) a little better.

My dream collaboration would be…
This one's easy. The other Frank Hamilton. He's 84, lives in Atlanta, Georgia and was friends with Woody Guthrie.

To try me out, listen to my song…
For a soppy duet with some nice words in, Flaws & Ceilings from album #1... and for something more upbeat, anything from album two. Saturday Night is about getting wasted, Had Enough is about outgrowing your home town and 21C is an existential crisis set to music.

If I wasn’t making music I’d be…
Happier? Richer?! Who knows.

Songs To Make Life Slightly Less Awkward is out now.

Listen to Songs We Fall Asleep To now.