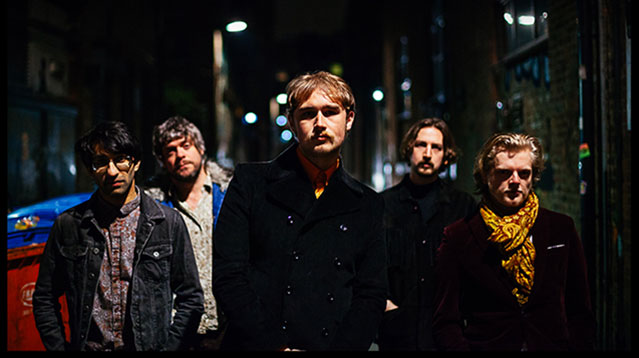 Ethan & the Reformation's spangled guitars and Eastern escapism make for a weird and wonky sonic ride - sort of like if Ravi Shankar took off with The Charlatans...

Although we don't know a hell of a lot about Ethan & the Reformation, they aren’t your average Manc five-piece, that much is certain.

Their reality-bending psych sounds, spangled guitars and Eastern escapism make for a weird and wonky sonic ride - sort of like if Ravi Shankar took off with The Charlatans.

Together, they've been cooking up a feast of rip-rolling riffs and spirited experimentalism for a couple of years now, but brand new seven-minute-long single Free From Everything is a good place to get acquainted.

What was the first song you developed an obsession for?
Lucy in the Sky With Diamonds, I'd never heard anything like it.

What’s the first gig you went to?
Eric Clapton at Manchester Arena.

What’s the first instrument you ever got hold of?
An acoustic guitar.

What is your worst musical habit?
It's both my greatest strength and weakness but I'd say my lazy playing style, technically it's horrendous, but it works.

What’s the best piece of musical advice you’ve ever been given?
I was told early on in my songwriting career by someone very important to my development as a writer that I should create music that comes natural to me, don't try to be something I'm not, let it come from somewhere authentic.

Where do you discover new music?
In the wonderfully dingy clubs and bars of Manchester, there's some amazing artists here at the moment.

What’s your favourite venue?
My favourite venue that we've played would have to be the Deaf Institute in Manchester, my favourite I have attended is hands down KOKO in Camden, such a beautiful building.

Who is your current favourite band/artist?
That's a tough one, at the moment I'm really digging Father John Misty, the depth and macabre beauty in his songs are incredible. I like the fact that he doesn't take himself too seriously, like, even he isn't exempt from his scathing criticisms!

What inspirations outside of music impact your songwriting?
Everything. I've said this before, there is so much beauty still left in this shitshow of a world we live in if we take the time to observe it.

What track of yours best represents your sound?
Free From Everything (which also happens to be our new single...)

What’s next for you?
A few festivals and generally a lot of hard work, a lot of good times and a fair amount of bad ones too, I suppose?! What the end result of that will be, no one knows but I feel great about this whole project, it means something to lots of people who experience it and that can only ever be a good thing, right? I don't think there is another group out there that sounds like we do, people seem to really dig that.