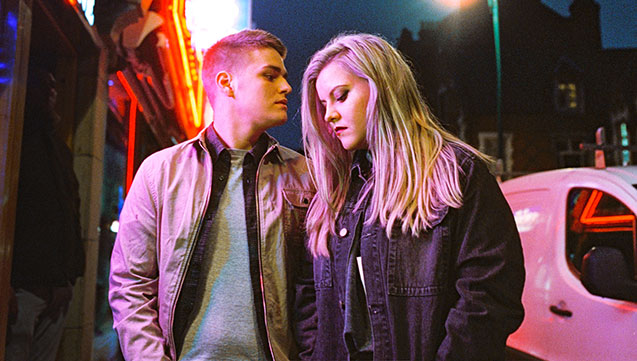 Gethin Williams and Catrin Hopkins are the Welsh songwriting brains behind electronic pop duo Dusky Grey. Get to know more about their infectious summer sounds...

With just two infectious single under their belts so far – Told Me and the brand new Call Me Over – they’ve already managed to rack up over seven million plays on Spotify.

They’ve also turned ears at BBC Introducing in Wales, London and Merseyside, and hit Ones to Watch lists both in the UK and US for their bare-bones pop and all-out melodies.

Now signed to East West/Warner Music Group, we spend 30 seconds with the pair to learn where they’re going next…

What was the first song you developed an obsession for?
Geth: For me it was Everybody by Backstreet Boys, I taught myself the dance end everything. I was a cool child.
Catty: Mine was completely different. Dad played me the best of Johnny Cash on the way to school every morning so I thought A Boy Named Sue was the greatest.

What’s the first gig you went to?
Catty: I’m pretty sure mine was Girls Aloud, I was convinced I was going to be a sixth member when I got older so I’m still pretty upset they broke up.
Geth: Rudimental was mine. I saw them at a festival and I loved their energy. Blew me away.

What’s the first instrument you ever got hold of?
We both played guitar first, Geth’s the only one that actually got good at it though.

What is your worst musical habit?
I think our worst habit is that we don’t stop. We’re always either listening, analysing or creating music. We only stop for chicken wings.

What’s the best piece of musical advice you’ve ever been given?
The best piece of advice we’ve ever been given is from a producer and dear friend, James Earp. He told us that the recipe for making a good song is to simply just take out the bad parts and put in the good ones and not to try too hard to make things work if they don’t. Which is really simple but effective.

Where do you discover new music?
We always go to Spotify, Apple Music or the Mahogany Sessions!

What’s your favourite venue?
Geth: I have been to quite a lot of festivals and the one that stayed with me is BoomTown. I highly recommend anyone to go - it’s mad!
Catty: I’ve never been, but I watch videos of people at The Grand Ole Opry religiously.  hat’s my dream place.

Who is your current favourite band/artist?
We’re both big fans of MØ and a guy from Canada called Andy Shauf, but Fleetwood Mac will always be a favourite of ours.

What inspirations outside of music impact your songwriting?
Life impacts songwriting, a lot of the time we use it to offload emotions. We both have a lot of fun with what we do every day. It doesn’t feel like work so we hope that this is reflected in our writing.

What’s next for you?
Chicken wings and more music - which we can’t wait to share…