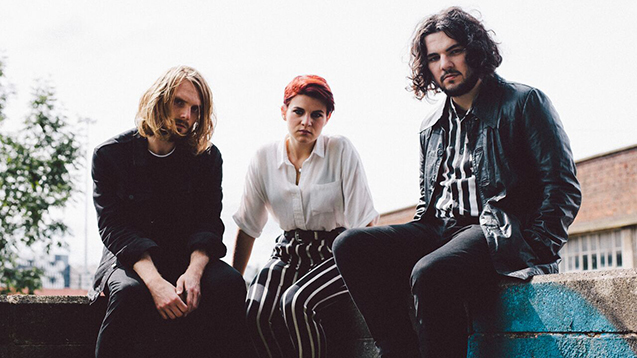 Post-punk trio Dead Naked Hippies are the latest exciting promise to burst out of the Leeds scene, wowing critics with their ‘gritty but pretty’ sound. We catch up with drummer Jacob to find out more...

Post-punk trio Dead Naked Hippies are the latest exciting promise to burst out of the Leeds scene, wowing critics from DIY to Louder Than War with their self-described ‘gritty but pretty’ sound.

Much like their name, their music makes you stand to attention and take note. Debut single, Lights Out, was produced by Matt Peel (Eagulls, Pulled Apart By Horses) and is a formidable sounding cut, with vocalist Lucy Jowett’s ardent howls channeling The Kills’ Alison Mosshart via Savages’ Jehnny Beth.

Signed to Leeds label Dance To The Radio, the band recently blew minds at Leeds Festival with their raucous set and have just dropped a brand new self-titled EP, written in backlash to the general election ('we were the happiest and most pissed off we’d ever been and you can see that laid bare in the songs' they've said of the writing).

Filled to the brim with punchy licks that will get under your skin and delivering a full-throttle wall of sound, it's a self-assured debut that charges ahead with purpose.

Currently wrapping up their mini UK tour in support of the EP, we spoke to drummer Jacob in-between shows to find out more...

What was the first song you developed an obsession for?
It was Soundcheck (Gravity) by Gorillaz. Their debut was the first album I’d ever religiously listened to. My parents are both really into music, so growing up it felt like I was experiencing a new band or artist almost every week, it was ace. Think that carved the path for my broad listening habits now. Gorillaz were the first band I’d got interested in off my own accord and my parents ended up being big fans too. There was just something about that record and particularly that song that ignited my imagination as a child.

What’s the first gig you went to?
I saw Foals at The Engine Shed in Lincoln when I was 16, they were immense. Pulled Apart By Horses were supporting too so it was a ridiculous line up. Foals really cemented themselves as one of my favourites at that show and I’m still listening to Antidotes on pretty much a weekly basis.

What’s the first instrument you ever got hold of?
I actually learnt how to play piano when I was really really young. Still annoys me that I didn’t keep it up.

What is your worst musical habit?
I’m a bad one for letting the red mist descend when I make a mistake. It’s fine playing live, but if we’re in the studio or writing a new song and I can’t play what’s in my head I turn into a demon. It never lasts very long and I always aim it at myself but it gets pretty fiery. Joe and Lucy just tend to let me get on with it and get it out of my system. Think they find it pretty funny to be honest.

What’s the best piece of musical advice you’ve ever been given?
That’s a really tough question! Whenever I go to write a new part for a song I still hear Kenny’s (my old drum teacher) voice in my head telling me to isolate each limb and build a rhythm across each one that moves with the melody of the song. It’s probably that.

Where do you discover new music?
I always tend to just stumble on new bands. For me, if the first time I listen to a band aligns with a semi-significant landmark in my life, I’ll always prefer them to a band I just discovered on my way to work. So It’s pretty much always a happy accident when I get into something new.

What’s your favourite venue?
I think I’d be kicked out of Leeds if I didn’t say The Brudenell for this. There is undeniably something special about that venue and every time we’re announced on a line up there, I can’t wait to get on the stage. I’ve seen so many great bands there as well, we even celebrated New Year's there this year. It was insane.

Who is your current favourite band/artist?
Kate Tempest. My girlfriend bought me her album for my birthday and I can’t get enough of it! The day we got back from filming the I Can’t Wait video, we put on her Glastonbury set cause Joe recognised her name. We were all exhausted as the filming process has been really intense but from pretty much her first word, we were all absorbed by her performance. By the end of her set I think everyone in the room had a tear in their eye, it was otherworldly.

What inspirations outside of music impact your songwriting?
I think for all of us, the grind of balancing a day time job with doing the band has a big impact. We all know that music is what we want to do and not being able to do it full-time yet leaves us all fairly frustrated. Generally we use the band as a cathartic release for whatever is pissing us off. Weirdly we tend to be pretty seasonal as well. Now that the sunshine has gone, our music has definitely taken a turn.

What track of yours best represents your sound?
I think Smother from our EP encompasses what we’re about at the moment. There’s a lot packed into that song and I think it highlights a lot of the details in our sound. The music that we’re writing currently is probably going to take the mantel however, as we all feel really good about what’s going on behind the scenes at the moment.

What’s next for you?
Well we’rve just released our first EP and we’re in the middle of the tour that we’re doing for that release. We’ve had a lot of shows confirmed recently for October and November so we’re going to be really busy in autumn/winter. We haven’t got strict plans for a next release but we’re very excited about the new material we’re writing. I’m sure there will be some cool stuff happening in later this year or early next.