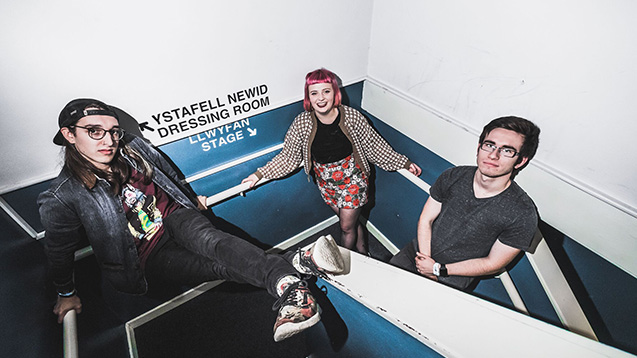 Welsh trio CHROMA are a formidable live presence on the alt-rock scene and have spent the last couple of years whipping up a dedicated following, playing sold-out shows in their home city of Cardiff and bringing in strong radio support from BBC Radio Wales and BBC Radio Cymru.

All thumping riffs, high-energy beats and wild powerhouse vocals that summon the spirits of Beth Ditto and Kathleen Hanna, they take inspiration from bands like Marmozets, Biffy Clyro and Reuben.

Their debut EP was released in 2017 and was packed with tracks full of punch that went down a treat at Reading and Leeds Festival.

Currently in the process of recording a single and adding the final finishing touches to their next EP, a summer of festivals beckons for this lively lot who are made for the big stage.

Here, they take a break from recording to answer a quick-fire round of questioning...


What was the first song you developed an obsession for?
Katie: Britney Spears - Hit Me Baby One More Time.
Bev: Green Day - American Idiot. Sparked the flame for alt rock after being brought up on classic!
Zac: It was probably Foo Fighters - Monkey Wrench. Playing that over and over on Guitar Hero 2 was amazing. I was never great at guitar yet I could play an absolute banger!

What’s the first gig you went to?
Katie: The first gig I remember going to was probably My Chemical Romance on their Danger Days Tour. I think Gerard way was my first crush.
Bev: My first proper gig was The Hoosiers when they came to Cardiff in 2008. The theme was fancy dress and it was mental!
Zac: First gig I ever went to was McFly at the CIA. McFly have some killer tunes.

What’s the first instrument you ever got hold of?
Katie: My grandparents used to have a mini organ in the front room. It was my second favourite thing to play with as a child. A dusty black rocking horse was the first. Of course.
Bev: A recorder, then a guitar. I’m glad that I stuck with the latter.
Zac: An organ.

What is your worst musical habit?
Katie: Sometimes I don’t warm up before singing because I feel self conscious about doing it in front of people. The boys make a point about doing it together now. It’s becoming more important to me to protect my voice.
Bev: Defecting to the key of E when writing, because that’s where the bass it at its fattest!
Zac: Writing drum fills that sound great on record but awkward as hell to play live.

What’s the best piece of musical advice you’ve ever been given?
Katie: Follow your gut.
Bev: At the core, less is more.
Zac: The best drummers aren't the ones who play mental beats all the time but know when to go mad.

Where do you discover new music?
Katie: Festivals are my favourite way of discovering new music. I love to see an act live before I listen to them on record. Although, I love listening to Spotify playlists and radio.
Bev: I sometimes just hop randomly through YouTube and Spotify. The algorithm’s started to give me stuff I really enjoy now.
Zac: Mainly from gigs/friends. Sometimes, I check out places online like Spotify and YouTube.

Who is your current favourite band/artist?
Katie: Shame.
Bev: It’s been Tigercub for the past two years. I can’t fault it!
Zac: I’ve been listening to a lot of The Wombats recently.

What inspirations outside of music impact your songwriting?
Katie: Probably my main inspiration are my friends. I like to write about people and my own personal experiences.
Bev: Mainly TV. Not necessarily the content, but definitely the themes and the flow.
Zac: Little subtle things. Things that you might find in every day life that tend to stick out like a sore thumb when you notice them but have never picked up on them being EVERYWHERE before.

What track of yours best represents your sound?
Katie: Our sound is rapidly growing into the big sister of our first EP. I would think the song that best represents us live would be Vampires. But if you look to the future we’re currently working on a single called Girls Talk that should be out in the next few months.
Bev: For me, it’s Blame It On Me. There’s enough of everything there to act as a summary.
Zac: Either Blame It On Me or Try Me. There’s a couple of songs in the woodwork at the moment that would make this answer very different, but they aren’t ready yet.

What’s next for you?
Katie: We are currently working on our second EP! We’re hoping to record and release it by the summer. I feel like the first EP was a coming of age for us. The next batch of music is more about life around us rather than just ourselves.
Bev: More music and more gigs!
Zac: Whatever opportunity the world decides to spring our way I guess. We have a few ideas in mind.