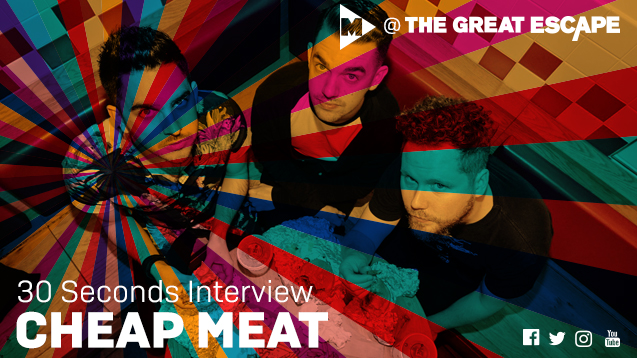 London trio Cheap Meat love wrestling as much as they love riffs and are set to go off (in a good way) at The Great Escape this year. Meet them ahead of their Brighton trip…

London trio Cheap Meat Ross Drummond (vocals and guitar), Matt Rebeiro (drums) and Peter Hakola (bass and vocals) love wrestling as much as they love guitar riffs and are set to go down a storm at this year's Great Escape.

Formed at a chance meeting by Ross and Matt at a pub quiz hosted by ex-Coronation Street star Martin Hancock, before later recruiting Peter via Gumtree, they've already kicked up a fuss with their hook filled, guitar heavy releases to date, including their latest killer, Spin-Offs.

Alongside the rocky roots in Cheap Meat's music, there runs a decidedly sharper edge, with guitars that owe their legacy to Eddie Van Halen, and satirical, tongue in cheek references.

Championed by Kerrang!, Upset and Rock Sound, the band will release their eagerly anticipated debut album later this year. We get to know them ahead of their Great Escape gig on Thursday 18 May…


What was the first song you developed an obsession for?
I’m Only Sleeping by The Beatles. When I hear the harmonies over 'keeping an eye on the world going by my window', I still get goosebumps. I was desperate to know how to do that.

What's the first gig you went to?
PJ & Duncan (Before they became Ant & Dec) on the Krazy Katz tour. I can confirm the ks made it even kooler.

What's the first instrument you ever got hold of?
Like all good children of the nineties, it's got to be the recorder. I can rip a mean rendition of Buzzy Bee.

What is your worst musical habit?
Always trying to go for the most saccharine and obvious chords. Pete our bassist and producer/writing partner in crime is always good at leading me away from the easy route and to the cooler/darker side.

What's the best piece of musical advice you've ever been given?
Don't try and be something you don't believe in. If you're making music because you think it's the kind that’s going to make you successful, you're going to end up miserable. And probably dropped after one album.

Where do you discover new music?
Apple Music playlists, 6 Music, Pitchfork but usually the best way is through pals or through other bands we've toured with!

What's your favourite venue?
I love the Black Heart in Camden, but my favourite was The Luminaire (RIP!).

Who is your current favourite band/artist?
I spent Christmas in Australia and became deeply obsessed with Crowded House which is probably not a very cool answer, but Neil Finn is an amazing songwriter. So him and Ryan Adams, his new record is amazing.

What inspirations outside of music impact your songwriting?
Comedy probably, I love stand up and improve. I think doing improv comedy makes your brain rewire itself in a different way, it's great for writing lyrics.

What track of yours best represents your sound?
Of the ones available at the moment, The Distance Between You and Me off our debut EP The Parts That Show, it's got a riff, a guitar solo and some tongue-firmly-in cheek lyrics that's pretty much the formula for a good time (it worked for Van Halen!).

What's next for you?
We're just finishing recording our debut LP, look out for it towards the end of the year!

Catch Cheap Meat play at The Prince Albert at The Great Escape on Thursday 18 May.

Listen to their latest single, Spin Offs below.