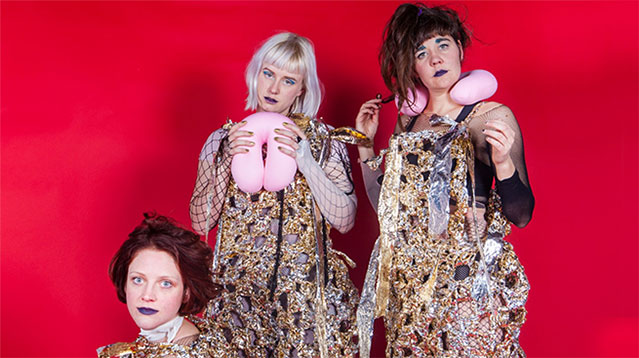 Charismatic Megafauna concoct grubby electropunk that's shot through with surrealist feminist undertones. Get to know them ahead of their debut LP...

London trio Charismatic Megafauna concoct a blend of feral electropunk that’s as apt at starting parties as it is provoking political thought.

Their grubby synth sound is shot through with surrealist feminist and sexual undertones, as lyrics traverse everything from female ejaculation to blokes in spandex or their general disdain for Theresa May.

It's a percussive free-for-all, with Trump-inspired in-jokes, anti-diet dispatches and girl-gang chants about mansplaining cyclists all crashing around their pared back groove.

Susannah Worth, Georgia Twigg and Jenny Moore first met in 2013 at Supernormal Festival, ironically surrounded by male-dominated line-ups. Finding themselves at a Saturday morning discussion about women and the creative process, they quickly set about imagining into existence the sonic beast that would become Charismatic Megafauna.

Five years on and the three-piece have performed at the Tate Modern, and across European cities from Amsterdam to Athens. Their debut album, Semi-Regular, is now in touching distance too, and the ladies will toast its arrival at a launch party at the George Tavern, London, on 18 April.

What was the first song you developed an obsession for?
Susannah: Kim Wilde – Never Trust a Stranger.
Georgia: Nelly the Elephant (packed her trunk and said goodbye to the circus).
Jenny: Whitney Houston – I Wanna Dance with Somebody

What’s the first gig you went to?
Susannah: Take That at Earl’s Court in 1995, the Nobody Else tour.
Georgia: Some band some boys in my year started that wrote songs dedicated to Coke, the soft drink.
Jenny: My dad’s eighties folk rock.

What’s the first instrument you ever got hold of?
Susannah: Recorder.
Georgia: Recorder.
Jenny: Recorder.

What is your worst musical habit?
Susannah: Worrying about the next song instead of concentrating on the one I’m playing.
Georgia: Suddenly completely forgetting what I’m doing and just hoping the rest of the song comes out fine (which it does, more often than not).
Jenny: Not listening.

What’s the best piece of musical advice you’ve ever been given?
Susannah: That there’s value in expertise, but also value in making up your own way.
Georgia: It’s hard to say. Probably from Susannah and Jenny reminding me that doing it at all is more important that worrying about how ‘well’ you’re doing it.
Jenny: Listen.

Where do you discover new music?
Susannah: Twitter, friends, gigs.
Georgia: My friend Sophie sends it to me.
Jenny: I love it when I discover a new band in person, at a gig we’re playing. That's the best. But otherwise, I follow many Instagram/Twitter/YouTube wormholes. They are really musically fruitful.

What’s your favourite venue?
Susannah: I’ll always have a special place in my heart for Brixton Academy.
Georgia: Union Chapel. You can sit down and have a cup of tea.
Jenny: The Old Dentist on Chatsworth Road, near Homerton. I’ve seen the weirdest stuff there and never been told ‘no’ when I asked to do something weird.

Who is your current favourite band/artist?
Susannah: I can’t stop listening to Trifle by Lone Taxidermist.
Georgia: I’m listening to Product by Sophie (not the same Sophie as before). It pumps me up for jogging and comforts me to sleep.
Jenny: I’m loving IAMDDB at the moment, the new Fever Ray album and Big Joanie – really excited for their upcoming record.

What inspirations outside of music impact your songwriting?
Susannah: The rhythms of speech, overheard or read.
Georgia: Daily lived experience.
Jenny: The feeling of restless leg syndrome at night. The moon, space, stars, planets, you know.

What track of yours best represents your sound?
Tools. It’s sparse but complex with a direct heartfelt message.

What’s next for you?
The album launch on 18 April. We’re looking forward to celebrating and thanking all the amazing people who contributed and made it happen.