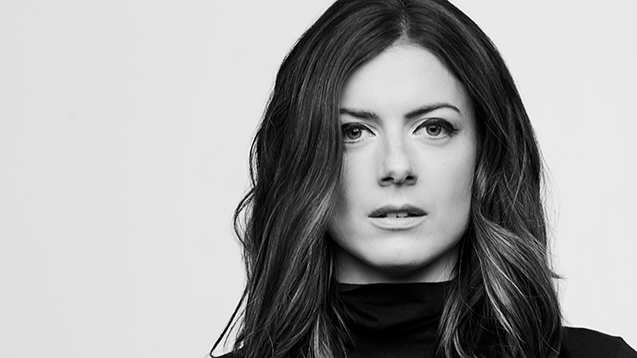 Looking for luminous, cinematic pop? Step this way and get to know Lincolnshire-born, LA-dwelling singer-songwriter Callaghan...

The BBC Radio 2 favourite has been living in LA for the past year, where she's been crafting a set of three EPs – the latest of which, Skin On Skin, is out now.

All gorgeously saccharine vocals and candied production, her uplifting sonics are full of sweet surprises. For starters, there's the 30-piece orchestra that appears on the tracks Broken and All Through the Night, led by Nicholas Dodd who has conducted every James Bond film since 1997.

Since releasing her debut self-titled EP in 2005, the singer-songwriter has divided her time between the US and the UK, touring and recording with Grammy nominated songwriter Shawn Mullins, recording an album in Nashville and playing live sessions for the likes of BBC Radio 2’s Bob Harris and Good Morning Sunday.

With a UK tour underway, including her biggest London show to date on 26 April (see full list of shows below), we get to know what makes her tick...

I remember being completely transfixed the first time I heard Elton John’s song Rocket Man and really getting into his music - listening to and playing it. It still has a magical effect on me every time that song comes on the radio, I stop what I’m doing and get lost in it. I don’t know what it is about that song, but I feel like it sends me to another place.

The first gig I remember was when I was five years old and my parents took me to Manchester to see John Denver. I was a big fan of his at the time and remember even at that age being totally mesmerised seeing him perform to such a huge room of people with just him and a guitar. I stopped listening to his music for a long time and then rediscovered it a few years ago and recorded Annie’s Song on my album Callaghan’s Acoustic Coffee House. Every time I sing that song it brings back a lot of happy memories of my childhood and the music I played growing up.

Music was always a big part of the house I grew up in, so there were a lot of instruments around to try. I tried the violin when I was five because my older sister played it, but then I got taken to see James Galway perform live and I became obsessed with the idea of playing the flute. Because I was so young my parents didn’t want to buy me a flute straight away so my mum found an old bamboo flute that had been in our family for a long time and said if I could learn on that, she would buy me a real one. So that’s what I did, and got my first proper flute when I was six. I carried on playing it for years until singing and songwriting finally took over and I taught myself piano and guitar because they were a good bit easier to play when you’re singing!

I’m self-taught on piano and guitar so I know I probably have a lot of bad habits! Although I can read music and spent many years studying classical music, when it came to writing songs and performing them I just couldn’t connect with a formal way of learning how to play. So I took my favourite Elton John songbook and, because I knew how all the songs sounded already, figured out how to play them on piano. I used to feel self- conscious about being self-taught on piano and guitar but over the years I've met so many other musicians who play like that and in some ways I think that it’s a benefit not having any rules to worry about breaking!

Not to try and sound like anyone else. To find your own voice. I grew up listening to a lot of the big artists like Celine Dion, Mariah Carey, Whitney Houston, and wanted to be like them. It took a long time to discover my own voice, my own view of the world, and have the confidence to put that in a song and sing it for people. Whatever your style of music, if the audience can see that you feel every single world you sing, and the emotion is genuine, that is more powerful than anything.

I am a complete music obsessive. I can’t go through a day without having music on so I’m always trying to find new things to listen to. I use the internet a lot, like Spotify and Youtube to find new artists I might like and also listen to a lot of radio. It’s great that even when I’m touring in the US I can also stream BBC Radio shows so I listen to them all the time.

I’ve been lucky enough to play in a lot of amazing venues, and it’s hard to choose just one. There’s a venue I play at in Atlanta every year called The Red Clay Theater that is very special because it’s run by Eddie Owen, the man who gave me my first show when I moved to the US. It’s a really beautiful theatre and I do a special show there every year around my birthday with my full band and it always feels like a huge celebration.

Touring in the UK is always a great feeling because I love being back in familiar surroundings and getting to visit some of my favourite places. I always look forward to playing London every time I come back to the UK because I lived there for many years and love coming back to the city. This time I’m playing at Bush Hall which is a venue I love, and it’ll be my biggest London show to date.

There are a few favourites that always remain on my playlists, and then new discoveries I become obsessed with for a while. Some of my long-term favourites are Coldplay, Keane, Queen, Celine Dion and Ennio Morricone. I love artists who are big performers and create music that paints pictures in your mind and transports you somewhere.

I was lucky enough to record with the legendary artist Louis Price (ex-lead singer of The Temptations and The Drifters) on a couple of my latest songs, so I have been enjoying listening to a lot of soul music from that era.

I always think that you have to live life to write about it, so I always try and absorb as much as I can from wherever I am at the time. It has been interesting getting to experience living in various places in the US - Atlanta, Nashville and now Los Angeles. I think it’s always inspiring to move somewhere new and see the world a bit differently and that gets reflected in the music I make and the people I work with. Living in LA for the last year has been great because when I get writer’s block I can take a walk on the beach and it always gives me inspiration for a new song.

My latest EP Skin on Skin features four songs that really represent the kind of music I’m making now - a mix of powerful cinematic pop songs and feel good anthems. One of my favourite tracks on the EP is a song called Broken that features a 30-piece orchestra and was written about the chaotic, unpredictable state that the world feels like it’s in at the moment. I wrote it with one of my producers, Starr Parodi, and we recorded the vocals straight after finishing it. There was so much raw emotion and feeling from having just written the song that we left those demo vocals on the finished recording.

I’m touring in the UK in April, starting in Liverpool on 17 April, then Cheltenham, Lincoln, York, Glasgow, Gateshead, London, Buckingham and Colchester. I’ll be performing songs from my previous album, A History Of Now, which got so much support from BBC Radio 2, as well as my latest EP. I’ll also be back in the UK in the summer for some festivals which I’m really looking forward to. Hopefully we’ll get a good summer this year with lots of sunshine!