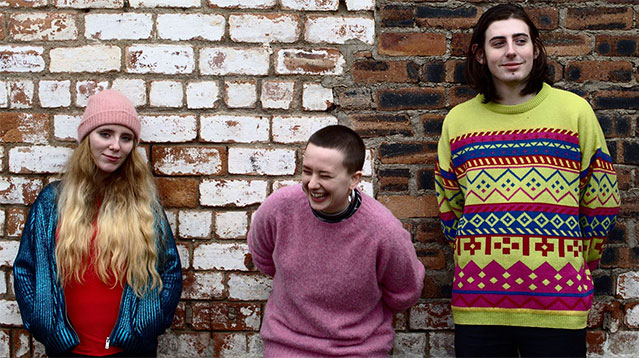 Soft and screechy, cautious and carefree: DIY Glasgow trio Breakfast Muff are a cacophony of contradictions. Getting your head around their awkward pop contortions is a pleasure though...

Soft and screechy, cautious and carefree: Glasgow trio Breakfast Muff are a cacophony of contradictions.

Getting your head around their awkward pop contortions is a pleasure though. Bubblegum punk is an underrated corner of DIY in 2017, and these three are pulling it off brilliantly.

From the fumbling honesty of two-minute gems I Like To and R U A Feminist, to the driving anger of Feast, theirs is a sound that gallops along at 100 miles an hour and doesn’t paper over the cracks.

The trio brings together elements of ace acts Joanna Gruesome, Spinning Coin, Rapid Tan and Hairband in Eilidh McMillan, Simone Wilson and Cal Donnelly, who all switch and swap twitchy bass, guitars and drums at will.

With an open bi/pansexual agenda and absolutely no restraining orders on their candid wordplay, it all adds up to a ridiculously endearing and poignant vignette of sexuality, anxiety and homespun creativity in 2017.

Earlier this month they returned with album number three, a messy hit of fun aptly called Eurgh! To celebrate its release, they’re doing an in-store at Rough Trade East, London, tonight (21 July). After that, they’re out on a mini-tour of the UK with Neurotic Fiction, dates below.

What was the first song you developed an obsession for?
Maybe not the first but the most O B S E S S E D I've been with a song was Ask by The Smiths because someone I was obsessed with introduced it to me on the first night we kissed when i was 15ish. This is before I realised how boring and gross white male pop stars are.

What’s the first gig you went to?
Technically the X Factor live tour, but in terms of gig gigs, when I was a teen I was really into indie music so you can imagine the kind of thing.

What’s the first instrument you ever got hold of?
A recorder! I was i the recorder group in primary school - it was very, very cool. I have played cello since I was eight. When I was about 16 I picked up a guitar in music class and the teacher said it didn't suit me. I never really started playing guitar until we started Breakfast Muff when I was 21.

What is your worst musical habit?
I tend to write songs/parts I'm not skilled enough to play - I'm still very much a beginner with guitar, bass and drums! Or I write songs on guitar sitting down and can't play them when I stand up.

What’s the best piece of musical advice you’ve ever been given?
To just keep playing no matter what happens. One hundred percent advice I need to this day because I always make mistakes or get distracted or something breaks. Once Simone's hair got tangled in my guitar.

Where do you discover new music?
Mostly through friends, touring and other people posting about bands on Instagram and stuff, definitely mostly other people sharing stuff they like.

What’s your favourite venue?
My favourite place to play at and watch bands is Wharf Chambers in Leeds. It’s a cooperative run space that’s also used by community groups. I saw Downtown Boys play there it was amazing. Also they sometimes make vegan fried chicken!

Who is your current favourite band/artist?
Aahh that's such a hard question. Just now I'm listening to Powerplant by Girlpool and Telephone by Noname all day long. Please don't make me choose!

What inspirations outside of music impact your songwriting?
I guess just what’s going on around me, from the minutiae of personal relationships and mental health stuff to what’s happening in the world at large. That’s quite a boring answer sorry.

What track of yours best represents your sound?
That's pretty hard because we all swap round and take different roles in the songwriting for each song. Personally for me, R U A Feminist is the best representation of what I write songs about and how they sound. If you asked Cal or Simone the answer would be different though.

What’s next for you?
We're going on tour in the UK tomorrow with our pals Neurotic Fiction, and the album is out now! Other than that I guess playing more gigs and writing the fourth album!

Eurgh! is out now via Amour Foo.

https://breakfastmuff.bandcamp.com/
New Music
Back to top