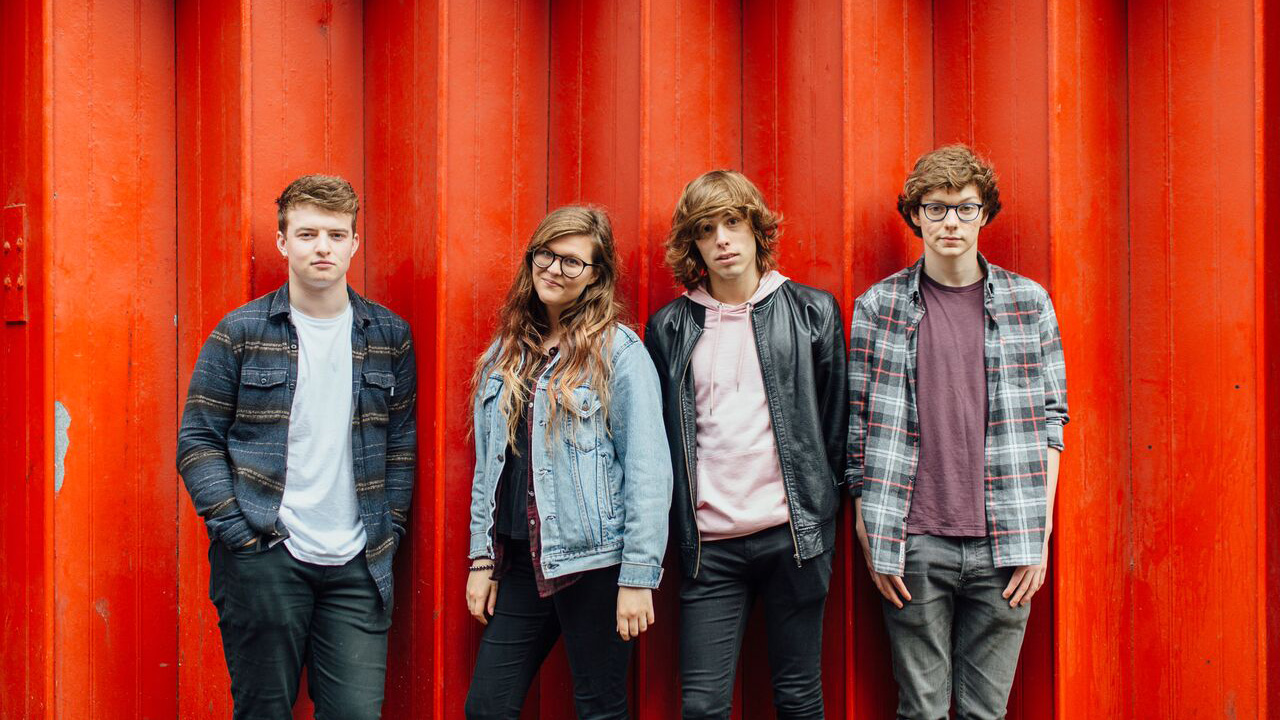 Bursting with energy and infectious hooks, the brother-and-sister-fronted quartet from Northern Ireland are whipping up the perfect blend of pop-rock laced with knowing melancholy.

Ash aficionado? Green Day buff? My Chemical Romance fanatic? If your answer to this assuming trio of questions is a resounding 'yes', then allow us to introduce you to the undeniable charms of Brand New Friend: your favourite new brother-and-sister-fronted quartet from Northern Ireland.

Bursting with energy and infectious hooks, the Castlerock foursome have been on a whirlwind of adventure ever since putting out their American Wives EP.

First there was their debut Irish tour in January, then came a slew of summer festival bookings including BBC Radio 1's Big Weekend in Hull – and more recently, the announcement of their signing to Xtra Mile Recordings, who didn't hesitate to snap up a good thing.

'The first time we heard Brand New Friend we knew we wanted to be involved. It was immediate,' says the label's founder Charlie Caplowe.

With song titles like I Was An Astronaut, Your Friends Hate Me and I Love You, Goodbye, the band are whipping up the perfect blend of pop-rock, laced with knowing melancholy.

Led by the perfectly matched harmonies of siblings Taylor and Lauren Johnson, the pair dual across fuzzy guitars and ascending keys, backed by the ferocious rhythm of bassist Aaron Milligan and drummer Luke Harris.

Currently prepping for a support slot with The Strypes at Dublin's Whelans on 21 December, we caught up with the band to get the lowdown...

What was the first song you developed an obsession for?
Taylor: It was either Are You Ready for Love? by Elton John or Fill My Little World by The Feeling.
Luke: I was obsessed with Jailbird by Primal Scream as a child.
Aaron: Another childhood one – Everything About You by Ugly Kid Joe.
Lauren: Probably a Destiny’s Child song, like Survivor. I’m still obsessed with Beyonce to this day!

What is your worst musical habit?
Taylor: It used to be not wearing contacts, nearly fell off stage every other gig!
Luke: Breaking sticks! It happens at every gig without fail.
Aaron: Not wearing earplugs at noisy gigs.
Lauren: I shouldn’t admit to this as a singer, but sometimes I forget vocal warm-ups before going on stage.

What’s the best piece of musical advice you’ve ever been given?
Taylor: Play every gig like it's Wembley, doesn't matter how many people are there.
Luke: Practice…
Aaron: Play like no one is listening, a tip I learned from my uncle who has always been in bands.
Lauren: Don’t compare yourself to other people and be confident in your own ability.

Where do you discover new music?
Taylor: I love music magazines like Q or NME, or Bandcamp surfing.
Luke: Usually I find it from browsing Youtube, or just hear about it from other people.
Aaron: I also usually get new music recommendations from chatting to other people and friends who are into similar stuff.
Lauren: I usually stumble upon bands on Spotify, and I’m a big soundtrack geek. I’m loving the Stranger Things soundtrack at the minute!

What’s your favourite venue?
Taylor: You can’t beat Limelight in Belfast! I used to go and ask the DJ's to play Morrissey songs on nights out.
Luke: My favourite venue has always been the Ulster Hall.
Aaron: I love Custom House Square, the original location for Belsonic.
Lauren: I love Whelan’s in Dublin, we’ve played there a few times and it’s always great.

Who is your current favourite band/artist?
Taylor: I have been listening to loads of New Order recently.
Luke: I’m just back from seeing Nick Cave and the Bad Seeds in Berlin so I have to go for them.
Aaron: It’s always The Ramones.
Lauren: I’m loving Alvvays and their new album Antisocialites.

What inspirations outside of music impact your songwriting?
Taylor: It's all about people! Every song we have, can be traced back to someone specific or a group of mates we hang about with. It's usually very honest, very raw. Though a lot of our songs are quite sad, we try and put some hope in there too - a big uplifting chorus or a riff from Aaron or Lauren that makes you feel like everything's gonna be okay!

What track of yours best represents your sound?
Taylor: A new one called Girl, which was written after a swim in the sea...
Luke: It has to be Milk Chews. It’s yet to be released but it’s a staple in our set.
Aaron: I think it is Seatbelts for Aeroplanes, another live track that explodes live.
Lauren: It’s got to be I Was an Astronaut, our first single!

What’s next for you?
Aaron: We’re gearing up for our debut album being released in the new year through Xtra Mile Recordings.