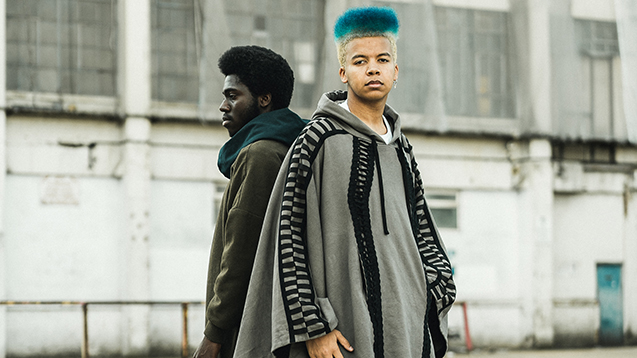 The duo are part of London's booming contemporary jazz scene, throwing grime, hip hop, neo-soul and Carribean into their melting pot of influences. We catch up ahead of SXSW...

The pair cook up their grooves and hooks in their self-dubbed Blue Lab, with rising names Kojey Radical, Ruby Francis and The Age of L.U.N.A regularly stopping by for sessions.

Having remixed tracks for Jodie Abacus, Dua Lipa and Rag’n’Bone Man, the twosome – Namali and David, aka NK-OK and Mr DM – released their debut EP, Blue Skies, in 2016 and have since scaled jazz charts in the UK, Europe and Japan and packed out shows including London's iconic Ronnie Scott’s.

Their debut album, Xover was recorded at Peter Gabriel’s Real World Studios and is due at the end of this month.

Currently at SXSW where they play at The Main II today, we caught up beforehand to find out what makes them tick...


What was the first song you developed an obsession for?
David: Patrice Rushen - Forget Me Nots.
Namali: Nas - The World Is Yours.

What’s the first instrument you ever got hold of?
Namali: Midi keyboards with broken volume button.
David: Keyboard Yamaha psr34.

What is your worst musical habit?
David: Jam sessions till late - very late.
Namali: I hoard my beats - I literally have loads!!!

What inspirations outside of music impact your songwriting?
Namali: Seeing great architecture - for instance, Morrocco.

What track of yours best represents your sound?
Blue Skies.

You’re off to SXSW - what are you most excited about?
Just getting there! And hearing loads of different bands/acts.

What’s soundtracking your long flight over there?
Ty's new album, Work of Heart.

What are you planning for the rest of 2018?
More gigs in different countries and new album to be released in late March/early April.

Below: watch our interview with Blue Lab Beats at SXSW.