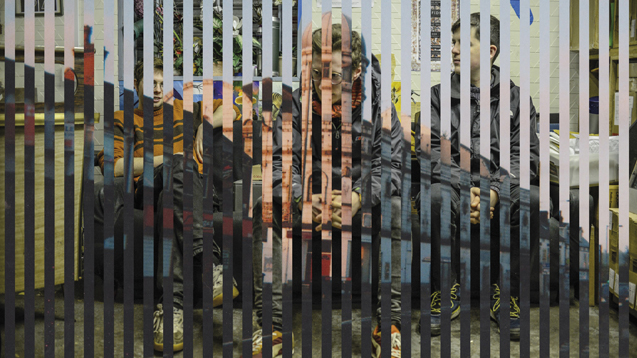 Afro-beat skronk merchants Blood Sport have made a name for themselves on the edges of Sheffield’s avant scene, blending serrated sonic edges with tightly wound rhythms. We meet a group dancing on the outskirts…

Afro-beat skronk merchants Blood Sport have made a name for themselves on the edges of Sheffield’s avant scene, blending serrated sonic edges with tightly wound rhythms.

The trio - Alex Keegan (guitar and drum machine), Sam Parkin (drums), Nick Potter (baritone and vocals) - have been together since 2010, playing blistering shows bringing the squat party and rave closer together.

2016 sees the group launch a re-newed attack, with the fruition of a year’s work in both the live and recorded realms unveiled. Their new record Axe Laid To The Root released on Blast First Petite following three EPs and a strong debut LP Life In Units, all released on DIY labels – Tye Die Tapes, the band’s own Hybrid Vigour Records and via The Audacious Art Experiment, the record-release wing of the independent arts hub they co-run in Sheffield.

Likened to M faves Golden Teacher and the likes of 23 Skidoo, Blood Sport are fast becoming a hypnotic musical force to be reckoned. Catch them live in April and May and get to know them below…

We first started writing music because…
We wanted to infuse the long-form rhythmicity of afro-beat with the intense immediacy of noise rock.

We have been making music since…
Early 2010.

Our music is…
Normally reduced to a self-prescribed genre aggro-beat - a term coined to avoid just being lumped into any specific genre, none of which we feel fully encapsulates us as a band. We see ourselves as existing in a realm half way between being a live band and a dance act.

You'll like our music if you listen to…
This Heat, Talking Heads, The Fall, Battles, Factory Floor.

Our favourite venue is…
The Audacious Art Experiment in Sheffield, tiny; but our spiritual home and the catalyst for so many amazing sounds here.

Music is important because…
It gives people the chance to escape, reflect and inspire.

Our biggest inspiration is…
It would be hard not to say Fela Kuti because he was the reason we all came together. His life was a unique one, uncompromising, political whilst inventing his own joyful dance sound that you can never quite shake when you’ve heard it.

Our dream collaboration would be…
Impossible to say but I’m sure we could do something ridiculous with Hieroglyphic Being.

To try us out, listen to our song…
Reflective Orange.

If we weren’t making music we’d be…
Richer, in better health, careerist generation Yers stuck in office jobs we hate.

In 10 years’ time we want to be…
Still churning away hopefully having located a larger group of people who want to hear what we’re doing.

Listen to Reflective Orange below.