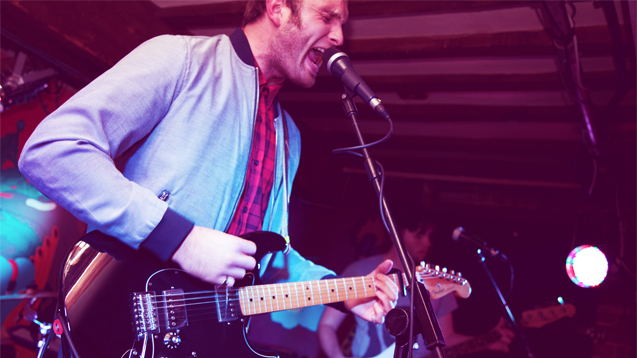 Welsh pop-rock act Billy Bibby & the Wry Smiles have ushered in 2016 with their debut EP and a UK tour. Get to know his powerful set of pipes and ramble rousing guitars...

Welsh pop-rock act Billy Bibby & the Wry Smiles have kicked off 2016 in style with the unveiling of their debut EP and a UK tour.

Newly released Bide Your Time features the band’s inaugural single Waitin’ for You, which blends arpeggio guitars, lively harmonies and solid rock beats. Upon its release in November 2015, Waitin’ for You caught the attention of DJs across the UK and beyond, earning radio airplay on BBC Wales, Radio X, UIC Chicago and elsewhere.

Billy Bibby & the Wry Smiles’ roots date back to the summer of 2014, when guitarist Billy Bibby left high-flying Llandudno quartet Catfish and the Bottlemen in search of pastures new. In the intervening 18 months, his latest project has grown into a fully-fledged four-piece, with the additions of Rob Jones on guitar, Matt Thomas on bass and Mike Pearce on drums.

Bide Your Time, says frontman Billy, aims to emulate classics such as Fleetwood Mac’s Rumours and Dire Straits’ Brothers in Arms - a bold ambition and a sign of a songwriter confident in his musical abilities.

In support of this new release, Billy Bibby & the Wry Smiles have recently embarked on a 20-date UK tour. Catch them at a town near you…

We first started writing music because…
It’s all we're good at! Well, I (Billy) can cook – but I'm no Jamie Oliver!

We have been making music since…
We were eating solids.

Our music is…
Rock/pop with a slice of countryside.

You'll like our music if you listen to...
James Bay, Fleetwood Mac, Kings of Leon – any music that makes you feel happy or turns a slightly depressing subject into something positive and sees the good from it.

Music is important because…
Name me one person who doesn't like some form of music? It has a huge impact on all our lives. Plus it helps when making babies.

Our biggest inspiration is…
The joys of life and how we have to just enjoy what short time we have here.

Our dream collaboration would be…
Noely G.

To try us out, listen to my song…
Waitin' for You. It’s a catchy little tinker.

If we weren’t making music we’d be…
Buying beer with the tax payers’ money, or probably traditional Welsh cattle farmers or summat!

In 10 years’ time we want to be...
A festival-headlining act with a reputation as being one of the best live bands around!

Listen to the new EP below.