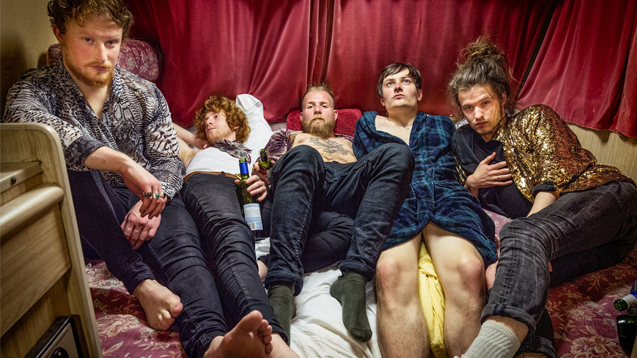 Concocted by brothers Joe and Jordan Bell, a pair raised on a diet of The Stooges, Magazine and Mission of Burma, Avalanche Party first took to the stage at the age of 12 when they traded their toy guns for guitars.

Ever since, they've invested serious energy in sharpening their musical claws in the North East and revving up their musical adventures. They received maximum props for 2016’s Solid Gold from the likes of BBC Radio 1’s Huw Stephens and 6Music’s Steve Lamacq and bagged support slots with the likes of VANT, Public Enemy and The Amazing Snakeheads.

New song I’m So Wet, produced by Tarek Musa of Spring King, will be the first of two singles set to be released via the Leeds-based independent label Clue Records as part of a new deal the band have just signed and acts as a great barometer of the pulsating, guitar-based noise they peddle. Check them out below and in all their fleshy racousness on their UK tour…

What was the first song you developed an obsession for?
My mum would know this one. I remember watching the Yellow Submarine cartoon loads when I was younger, so it was probably some Beatles tune. I remember taking a reggae compilation to some shit kids disco and the DJ would only play Spice Girls. I was like "hawaaaaayyyy" and he was like "naaaahhh" and I was like "fair enough man, like I'm only six. What am I gonna do?"

I remember tunes by The Coasters, Miles Davies and Link Wray being popular too.

What’s the first gig you went to?
I've been going to gigs since I was a helpless grasshopper. First "big" gig I remember though was Ian Brown at Middlesbrough Town Hall. Me and Jord were the youngest in there. He raised a tinnie at us, so naturally since then we've been tight, and he's one of the boys.

What’s the first instrument you ever got hold of?
I got a little tiny guitar when I was five I think. I was about 12 when I started playing "properly". I started learning to play on my dad's bass which is a lovely Antigua 1978 Fender Precision. I still play this now and you can't make me part with it (five grand might make me part with it).

What is your worst musical habit?
Scratching my back with a banjo.

What’s the best piece of musical advice you’ve ever been given?
Put everything into it. To always do your own thing and stick to your guns. Simple but it's very important. There's so many bands out there (which is great) but you'll never really get anywhere by copying The Courteeners or whoever note for note. Wear your influences on your sleeve but don't wear the three piece suit. You'll never get anywhere by playing the Dog & Duck every Thursday in Bognor Regis to your pals and the barmaid Hilda either. Get out and amongst it. The more graft you put in, whether that's gigging, rehearsing, practicing, promoting etc, the more you get out. Don't rely on anyone else to do it for you.

Where do you discover new music?
These days usually from the lads in the band, the internet, touring etc. We have played with some amazing bands on tour in Europe and over here. I don't really get the chance to listen to the radio but very occasionally I manage to pick up a midget gem from a field of potatoes.

What’s your favourite venue?
We’ve played so many great venues. Locally probably The Empire in Middlesbrough. It’s a great old theatre that's hosted everyone over the years from Charlie Chaplin to the Scissor Sisters. Otherwise I would have to say Leeds Brudenell Social Club. We’ve been lucky enough to have played there on our last UK tour and it was mega. Saying all this though we played a festival in Belgrade by a huge river, with the sun going down behind the city in front of us. Few tinnies. Bloody lush.

Who is your current favourite band/artist?
Again difficult and upsetting to select just one. I'll no doubt do some Spotify playlist to give you the big picture. I will say The Blinders for now though as I've literally just listened to them, and they're like little brothers to us. And are mint.

What inspirations outside of music impact your songwriting?
The unforgiving wind of the moor tops. Rosedale iron mines. The decline of Teesside industry. The view from Roseberry Topping. Three trebles for a fiver. True romance. Yo-yoing up and down the M1. The invention of the railway. Juninho. Busking on top of York Minster. Fish and chips on Saltburn pier. The big, fuck off, asbo gulls on Whitby pier. Buckfast. Theresa May the uber meff.

What track of yours best represents your sound?
There's so many elements and influences to our tunes that's quite a tricky question. I'm really happy with what we got out of the sessions for our last two singles though and they're the first couple of releases as this current line up. It doesn't get much more relevant than that so let's say Solid Gold and I'm So Wet.

What's next for you guys?
Currently back in the UK for festivals over summer. We'll also be releasing another single on Clue Records and we're writing for a brand new EP. We'll also be touring the UK again from September onwards. Then it'll be bath and bed.

Listen to I’m So Wet below.

The band are also on tour during the rest of the summer.