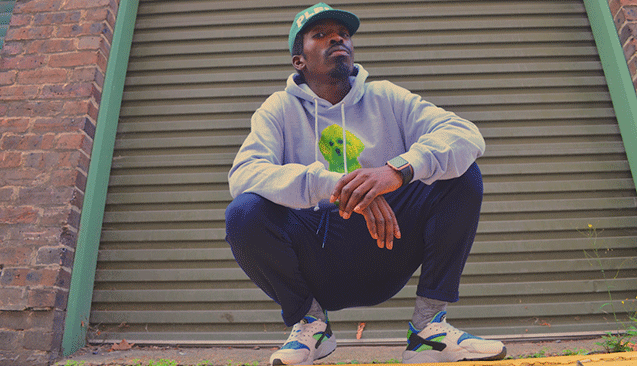 London-based Ash Shakur is a multidisciplinary visionary who dabbles in art, illustration and pioneering hip-hop to get his message across. Get the skinny...

London-based Ash Shakur is a multidisciplinary visionary who dabbles in art, illustration and pioneering hip-hop to get his message across.

With nostalgic storytelling and an ear on jazz, soul and funk, his smooth bars exhume flavours of Nas' Illmatic and De La Soul's 3 Feet High and Rising for the 21st century.

Recent tastemakers to get behind his style include French label Kitsuné (for last summer's single Lead The Way), and more recently Jakarta Records, which released All Smooth, his collab with producer Bluestaeb.

Outside of music, Ash is the co-founder of Art Life Central, a collective that attempts to subvert negative attitudes to his South London home and express creativity and freedom through music and fashion.

I think it was when Mos Def performed in Brooklyn park. It was a while ago that's when he announced his name change to Yasiin Bey.

A harmonica my mother bought for me. It was really fun to play with. I was probably making a lot of noise with it, but it was cool.

I'm not really sure haha! I haven't noticed.

I haven't got it yet personally. What I can say is, ‘What will I contribute?’ Make the sound that you haven't heard before! Don't worry that it's not the same as everybody else, people will get it later on and find it refreshing!

From friends and sometimes when I walk into a store. Right now, it's online

Jazz Café, Camden. It's just one of the best places to play. I've performed there twice now - it's a nice intimate setting. A lot of great acts have performed at this legendary space.

My neighbourhood and travelling. Art and design also make me write from a different perspective.

Anna's Arcade - it's not out yet - once it's officially released you’ll understand!

Look out for my new project titled CAKED UP POP UP STORE! It's gonna be a really fun concept. I'm working on it right now.

Tune into his latest track, Made It -