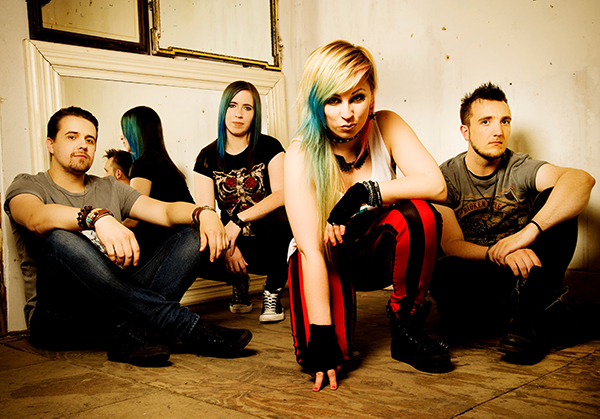 Altered Sky are a Glaswegian four piece who offer a refreshingly optimistic take on scuzzy college rock. With a debut album and a UK headline tour on the way, we thought it was high time for a chat...

Ana Nowosielska (vocals), Amy Blair (drums/vocals), Richard Passe (guitar) and Ross Archibald (bass) first formed in 2010, and have since played small venues the length and breadth of the country, honing their sound and building an army of fans.

Walking a tightrope between pop and punk, they’re standing out from the crowd with the nation's tastemakers too - helped by a slew of radio friendly EPs.

Spritely indie confections Where I Belong and Live for It have already aired on Kerrang Radio, Planet Rock, Scuzz and K-ROQ, and with a debut album on the way, the stakes are rising fast for the Scottish rockers.

Their longplayer, Without Wonderland, lands on 20 November and will be supported by their biggest headline tour to date (details below).

With all this going on, we thought it was high time to catch up with Ana to learn more about the band…

We first started writing music because…
It was meant to happen....it was fate! I've been writing songs since I was five years old. Performing is in our blood.

We have been making music since…
2010. We got together for a first practice and recorded a four track demo EP after six weeks.

Our music is…
A mix of everything. We have found our true sound now but it's been a complete combination of You Me At Six, Avril Lavigne, Mallory Knox and much more.

You'll like our music if you listen to...
Rock music of any style or era. We draw upon a wide range of influences to produce our own unique style!

Our favourite venue is…
The Garage in Glasgow. We headlined the main stage to promote our EP In This World and we will be there all over again to launch our first album!

Music is important because…
It’s universal. It's something we all can share. It brings people together and it makes us feel ways that sometimes we could never imagine.

Our biggest inspiration is…
The artists and bands who push themselves to the limit. 30 Seconds to Mars' documentary, Artifact, made us realise that you have to give up yourself for something you love. There is no easy way to do that.

Our dream collaboration would be…
Nobuo Uemstsu, who wrote the music for a number of the Final Fantasy games and more. He is a genius!

To try us out, listen to our song…
Bury It All: it's our new single and the first song from our upcoming debut album. It's really catchy and the ultimate feel good song… even if I do say so myself!

If we weren’t making music we’d be…
Totally lost. I'd love to open a bird sanctuary or study whales! Designing video games would be kinda cool too.

In 10 years’ time we want to be…
Known all over the world. We want to tour Japan, Poland, the US, India. The list goes on. Can't wait for our album to come out and share it with all of you!