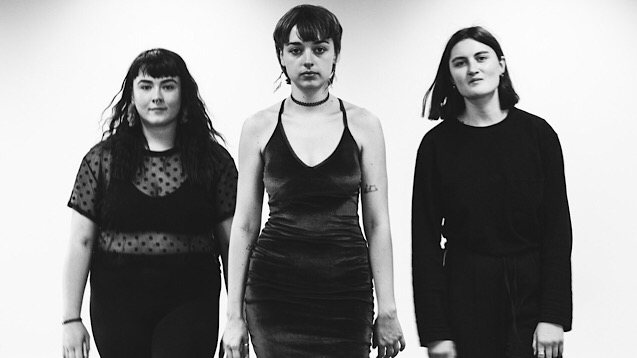 Post-punk trio Adwaith are making waves on the Welsh music scene and beyond for their beguiling but defiant sound. We find out what makes them tick, ahead of their debut album release.

Post-punk trio Adwaith are making waves on the Welsh music scene and beyond for their beguiling but defiant sound.

Hailing from Carmarthen, South West Wales, they've been making all the right moves since emerging in 2016, picking up supports with the likes of Gruff Rhys, a remix courtesy of Manic Street Preachers' James Dean Bradfield and were recently selected as a BBC Horizons artist for 2018.

Sonically, there's layers of early Siouxsie and the Banshees to be found, while latest cut Y Diweddaraf is a rebellious number with the scratchy proto-punk hallmarks of The Velvet Underground.

Sung entirely in Welsh, its gutsy mood is a reaction, the band say, 'to everyone saying leaving uni to do music was stupid! It’s about feeling empowered to do whatever you want, regardless.'

Made up of Gwenllian, Hollie and Heledd, the triplet head out on the road this month with Welsh Music Prize winner Gwenno, in support of their debut album, Melyn.

Set for release on 12 October via Libertino Records, it features the single Fel I Fod, which is already on its way to being one of the most streamed Welsh language songs of all time, with 300,000 plays and counting.

With all that going on, we caught up with singer and guitarist, Hollie Singer, to find out what makes her tick...

What was the first song you developed an obsession for?
The Darkness - I Believe in a Thing Called Love. Gwen's mother used to play it every morning when she drove us to school.

What’s the first gig you went to?
The first gig I ever went to was with my dad - he took me to the The Who in Cardiff and I loved every second.

What’s the first instrument you ever got hold of?
Recorder.

What is your worst musical habit?
Always writing in the key of E.

What’s the best piece of musical advice you’ve ever been given?
Don't put yourself in a box - write whatever you want.

Where do you discover new music?
Gigs, word of mouth, Spotify discover weekly.

What’s your favourite venue?
The Parrot in Carmarthen.

Who is your current favourite band/artist?
Boy Azooga/ Gwenno are our favourites at the minute.

What inspirations outside of music impact your songwriting?
Day to day life, people you meet and situations that you find yourself in.

What track of yours best represents your sound?
We change our sound with every song but currently it's our new single Gartref.

What’s next for you?
Going on tour with Gwenno, an album and Green Man festival!