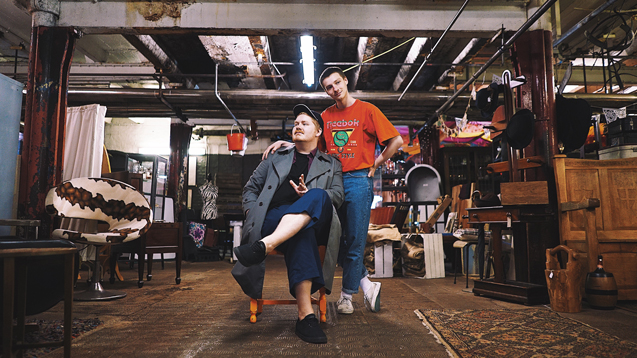 Originally a meeting of minds between Audun Laading and Stephen Fitzpatrick, Her’s are indie eccentrics informed by outsider art and off-kilter humour. Get to know them in our 30 seconds...

Originally a Liverpool-based meeting of minds between Norway's Audun Laading and Barrow-born Stephen Fitzpatrick, Her's are indie eccentrics informed by a mutual appreciation of outsider art and off-kilter humour.

The pair have a deep rooted bond that has powered them through support tours with Dutch Uncles, Happyness as well as much-loved slots at 2017's SXSW and The Great Escape.

The wide eyed hazy indie pop the pair have spun has already clocked over a million streams for debut single Dorothy and What Once Was, a figure only set to rise with the recent release of Songs of Her's, a collection of all their material to date plus five new songs.

What was the first song you developed an obsession for?
Audun: I remember trying to whistle the trombone part in Ce Matin La from Moon Safari by Air in a car as a youngster. My big brother was big on it so I thought I'd try and get in on it too.

Stephen: I instantly fell in love with Uptown Girl by Billy Joel. I think my mum recognised that I was diggin' the Westlife version and quickly put on the Billy vinyl. I tried my best to follow the lyrics on the sleeve but I was pretty young.

What's the first gig you went to?
Audun: My first live musical experience took place in a scrapyard. Me and a friend travelled one and a half hours to the next town Arendal to watch the Kaisers Orchestra play gypsy rock into the night.

Stephen: I always consider my first ever gig experience to be Steely Dan in 2008, and then I remember that my Dad also took me to see My Chemical Romance the year prior. So yeah, I was marching the black parade … Maybe I still am.

What's the first instrument you ever got hold of?
Audun: Before I started the trombone at seven, my grandad would indulge me by playing my original pieces. While my dad was at work he'd keep me busy "composing" some originals for the piano. He'd perform whatever combination of random notes I could put together, having no understanding of what I was writing. It's a great memory. As a six year-old, it made me feel like an accomplished composer.

Stephen: I've been surrounded by guitars and basses since day one. Basically, my mum managed to teach me some chords early on, on the biggest acoustic guitar ever. It was white and had a black 'm' bird symbol on it. It was old and trusty.

What is your worst musical habit?
We’re both very good at singing songs to death, most recently C is A B A G by Happyness. We love this tune and couldn't stop singing it at them whilst on tour. That and their drum fill from Anna, Lisa Calls. It must have been pretty grating for them by day 11 but we're still hammering their tunes.

Where do you discover new music?
Audun: Hours of digging through related suggestions on YouTube and Spotify.
Stephen: What Audun says plus Facebook groups ya'll.

Who is your current favourite band/artist?
Audun: It's always hard to pin one favourite, however I currently find myself wanting to emulate 'The Fleetwoods'.
Stephen: Currently I'm not interested in much new stuff so I’m back in the cosy world of R Stevie Moore, a place I'm always at peace in.

What inspirations outside of music impact your songwriting?
Monster Energy, Twin Peaks, Twilight Zone and Bulletball. Glad you asked this question!

What track of yours best represents your sound?
Ohhhhh tough one … The new collection of songs, Songs of Her's is our pallet of styles really, so to pin it down to one would prove difficult. But we should recommend everyone hit up the old classic What Once Was.

Visit thatbandofhers.bandcamp.com to find out more.

Listen to What Once Was below.