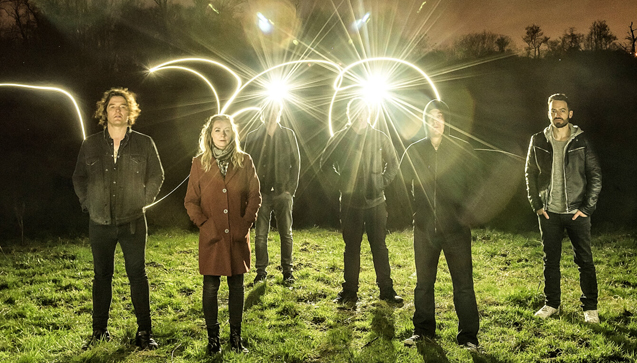 With six-piece ambient rock troupe Anathema recently dropping their bold 11th album to rave reviews, we thought it was high time we got the story behind their epic sound...

Here the ambient rockers have revealed some of the darkest, most challenging and unexpected music they’ve put their name to and the album has garnered great reviews.

With Musipea of Metal calling them ‘one of the country's most innovative and imaginative rock bands around today’ and Drowned in Sound stating that ‘Anathema really do cement their title as one of the UK’s most revered rock bands’,  we thought it was high time we learned the story behind their sound...

I suppose I always liked it very much but the first time I got into it that I can recall was the Live Aid concert in 1985. It had a big effect, we made recordings for some of the bands of that time on a video recorder which we watched a lot. I would have been 12 years old and had been playing guitar for a few months by then and the guitarists of U2, Queen and Dire Straits had a big impact on me.

The band first got together because we were just friends playing football after school. We all had guitars and I had a distortion pedal. This would have been around 1989 and we were all into Metal so that was it. It started like that really, just casual.

How does the creative process work for you? Do you have a ‘method’ or way in to writing and making your music?

I don’t really have a method. Guitars or piano chords will come first and then if there’s something good I’ll spot it early on, or my brother or someone else in the band will. Then the rest of the arrangements will be finalised. It can be a long time between the first idea and actually finishing the song - it can take a couple of year sometimes.

You’re just released your eleventh album – what keeps you inspired?

It’s just discovery I suppose. Also the fact is that I’ve never been in interested in doing anything else. As long as your energy is OK and you’re still hungry for stuff then it works. It’s a way of life.

What are your hopes/aims for the new material?

I just hope that it goes down well to be honest and that we can do quite well from it. I don’t have too many hopes or aims for it really. Who wants to be disappointed?

Aside from lineup changes, how has the group’s sound and songwriting evolved?

The line-up changes haven’t really effected the songwriting since Duncan Patterson left in 1998 I think. He was clearly a very good songwriter and obviously after that things changed, and it’s been quite steady with me, John and Vinnie doing most of the creative stuff. The sound has changed by merit of the imagination of the writers and obviously Lee Douglas becoming more a part of things has changed things as well.

What have been the highlights over your musical career?

Recently I really liked the Starmus festival with Steve Hawking, with Brian May and Hans Zimmer - that was a great day. I liked the recording process of the or album but honestly I don’t think about it that much. I’m always looking to where we are now and what’s coming next.

What records from your catalogue have been the most creatively satisfying?

They all were at the time really. They’ve all been different so I can’t really pick one. In terms of the recording process I liked working with Christer-André Cederberg  on Weather Systems and Tony Doogan (Mogwai, Belle and Sebastian and Super Furry Animals) on the new one. Mixing with Steven Wilson was great, that felt like the beginning of the next chapter for us.

Do you have a favourite piece of gear or studio kit?

My brother (Vincent) handles most of that stuff to be honest. The piece of kit most necessary to me is a guitar, keyboard and a computer. They’re the most essential things to me! Though I do have a few nice guitars these days…

Have you any advice for new songwriters and music makers?

I wouldn’t know where to start to be honest. There’s always that old thing about just being yourself but honestly, if you love it you’ll find your own way. I would say try to find a manager you can trust. If you don’t trust the manager then you’ve got big problems.

What should gig goers to your upcoming shows expect?

I don’t know if it’s too early to say… Hopefully everything will go to the next level. Musically and visually. I hope it’s a rewarding experience for gig goers.