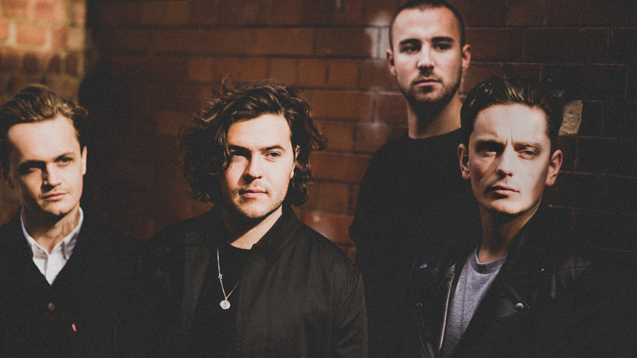 Nottingham’s Amber Run are hoping to follow in footsteps of heroes the National and fill the stadiums their supersized sonics deserve. Meet them in our 30 seconds…

Nottingham’s Amber Run are hoping to follow in footsteps of heroes Radiohead and the National and go large in 2017 with their stadium sized sonics.

Joe Keogh, Will Jones, Tom Sperring and Henry Wyeth make up the current group members, a band of musical brothers who landed a deal with RCA after some serious touring, BBC Introducing support and A&R filled gig at the Reading Festival.

Their debut LP 5am soon followed in 2015 and won them plaudits all over the UK alongside a loyal fanbase in love with their emotive, guitar laden noise.

But their success stalled, with Amber Run spending the following year reflecting on losing a member and record deal. Lesser bands would have given up but with them it just seems to have galvanised their resolve, with the band choosing to return in 2017 sounding leaner and stronger than ever.

For A Moment, I Was Lost is their riposte, a 12-track chronicle of their interval between the last, packed with moments of expansive beauty & full-blooded raw emotion. They’ll also be out on tour with Meadowlark across February but before their gigs, you can meet them in our 30 seconds below…

We have been making music since…
We started our first band together when we were 15 I think.

Our music is…
Very good.

You'll like our music if you listen to…
Music. Our favourite bands are Radiohead and The National.

Our favourite venue is…
Rescue Rooms/Rock City in Nottingham. We have a love affair with the city. We went to uni and worked there. It’s an amazing town with an unbelievable music pedigree.

Music is important because…
It’s a universal language.

Our biggest inspiration is…
Our own interpretation of the world around us.

Our dream collaboration would be…
Bon Iver.

To try us out, listen to my song…
No Answers, Fickle Game, or I Found.

If we weren’t making music we’d be…
Infinitely richer.

In 10 years’ time we want to be…
Stacked neatly on the top of your record collection.

Catch the band out on tour over February. For A Moment, I Was Lost is out now. Listen to Stranger from the record below.