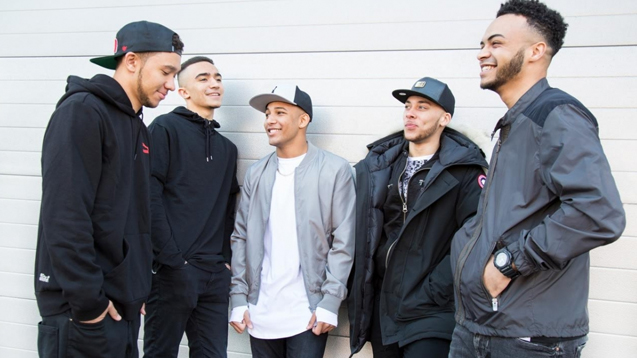 MiC Lowry are one of the boybands of the moment, a five piece vocal harmony group from Liverpool who are adding a different strand to the city’s rich musical DNA.

Weaned on Motown and nineties R&B, the group (Kaine Ofoeme, Akia Jones, Delleile Ankrah, Michael Welch and Ben Sharples) were discovered by their mentor Esco Williams, who, with the support of local youth organisation Positive Impact, helped them find an online audience via some timely covers.

They’ve since moved into writing their own material but while new music is being prepped in the wings, the wider music industry has bequeathed its blessings on the boys, with their victory in the . MOBO Unsung 2015 competition - we caught up with Ben from the band for more and to discover why everyone thinks they’re American…

How did you start?

The first few years was a case of learning to sing together. Now we’ve started writing our own music, blending our love for different genres and artists. While we all like different sounds, we’re united by our love for nineties R&B. We were all brought up on Motown - Stevie Wonder, the Four Tops, Marvin Gaye. When we write it’s a big mix up of our favourites.

Is it quite a democratic approach when you’re writing?

At the basis of our songs are guitars and vocals and we’ll build from that, then look at production later. That’s really important for us. We perform mostly like this so it’s important that our songs are good enough to stand alone. It doesn’t need a crazy production to carry the song.

When it comes to recording music, it’s been a bit of a challenge to find the right balance between being ourselves and it not sounding out of place on the radio. We’ve grasped that the further we’ve gone on.

Although we’ve been together for a while, we’re still learning to write and record as the first release, The Show EP, came out last summer. It was really well received which was just crazy to us. It’s been exciting. We’ve just been trying to grow more and more. But it takes time and practice.

What are you up to at the moment? Are you working on an album?

We did the first EP after being signed for a couple of months. Now we’re looking at getting some new material together, trying to refine the sound. The music we do naturally is chilled, R&B and hopefully in the next month or so we’ll be releasing some new music.

How has being from Liverpool influenced you?

It’s played a huge part in what we do as it’s a very musical city with the history and the past. Music is a big part of the culture and it’s influenced us a lot, just being around this environment. This is where we learned our trade. For the first few years we were together, we’ve probably gigged in every single little bar and club in the city, getting the experience of performing and growing.

It gives us an advantage as when people find out we’re from Liverpool, they tend to be surprised. Sometimes people just assume we’re American or if they know we’re English, they assume we’re from London. When they find out we’re from Liverpool, it’s surprising but that can be a good thing. You wouldn’t necessarily associate a soul/Rnb act like ourselves would be scousers. It can have its drawbacks, a lot of people suggested moving to London. There have been times when we’re working with certain producers and the logistics of arranging sessions have been tricky because of where we live.

It’s a bit of mission to get across the country. But we are really glad we decided to stay put. We’ve been here for so many years so we know different musicians, engineers, studios we can use. We have a team of people we can work with all based up here. It’s important that we stay here for as long as possible and make sure the music always comes from the city.

Is there a lot of infrastructure in the city?

In terms of labels, I’m not too sure as we were snapped up by Decca a few years ago so we never got into any negotiations. But yeah in terms of management companies, studios, there’s a real buzz and hub around the city.

We rehearse in Elevator studios and that's a funny place. In the building it’s all rented out to bands and studios and there’s a bar downstairs. You’ll go down there and every single person in the Liverpool music scene is either based in there or passes through. I was in there with Esco Williams, our mentor, just having a drink and Dave McCabe from the Zutons was in there. It’s a great reflection of the city as although it’s a big place but if you live here, it seems really small and everyone knows each other and their business. The music scene in general seems to have a real buzz about it. Sound City is great and held in lots of venues around the city. The Liverpool International Music Festival is great too - it’s only been going for a few years but seems to be getting bigger and bigger. We played the main stage last year which was fantastic, playing for a home crowd. The scene is definitely buzzing at the moment.

miclowry.com
Features
Back to top