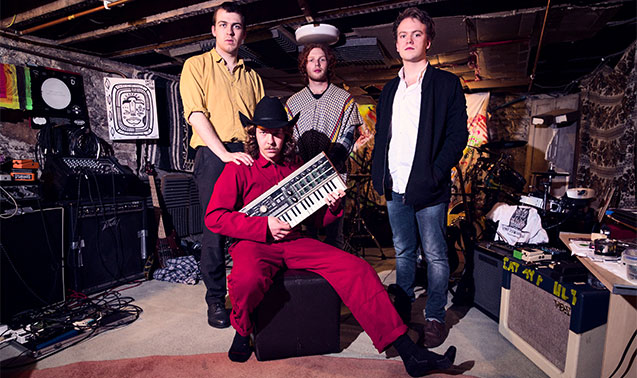 LICE kingpin Alistair Shuttleworth on the excruciating xylophone-solo purgatory that shaped him and his enduring reverence for Scouse synthsmiths OMD...

When he was eight years old, LICE kingpin Alistair Shuttleworth found himself in ‘xylophone-solo purgatory’ after his bongo-playing sidekick deserted him. ‘I think that was when I first decided I despised music,’ he says.

Fast forward to 2018 and Alistair has fortunately rediscovered his passion for sound, carving a niche for himself at the heart of Bristol’s punk renaissance.

Counting IDLES, Yowl and Heavy Lungs among their cohorts and influencers, LICE epitomise a fresh breed of caustic noiseniks uniting over the dystopian realities of post-Brexit Britain.

Alistair is the band’s main pen-pusher and vocal force, scribing railing monologues about all the hate now rife in society, from misanthropy to misogyny and xenophobia.

Spindly guitar lines, spiky riffs and incessant drums complete the picture, which veers from arch to completely sincere in a beat.

Obviously in thrall to The Fall and the (sadly) late Mark E Smith, the band were lucky enough to open for them a couple of years back. They’ve also played alongside Fat White Family and Girl Band.

Next week, they share a stage with Arrows of Love, Yowl, Bloody Knees and Heavy Lungs for an Independent Venue Week showcase presented by Strummerville in Hastings, while a pre-show warm-up at London’s Label Mates Festival 2018 this Saturday (27 January) will see them play alongside Kagoule, Weird Milk, pink kink and more.

Ahead of all the live mayhem, we grabbed a few minutes with Alistair to learn more about that xylophone solo…

The first one I can think of is New York City Cops by The Strokes, which I first heard when I was about 12; I loved that song. Me and my friends covered it very poorly in a band; I sang because the others were too shy. We played it at auditions for this school concert and this music teacher called Mrs. Watmough-Starkie laughed so hard at how bad we were, she started crying and had to leave the room. That killed the song for me, but also meant I never got stage fright again.

A newly-reformed Orchestral Manoeuvres in the Dark (OMD), performing at Wembley Arena when I was 12 years old. OMD are my dad's favourite band, and he always played them around the house when I was growing up, so getting to see them live was pretty special.

With their seminal album Architecture and Morality, they drew the blueprint for eighties synth-pop; after tours with Joy Division and Gary Numan, as well as a lucrative deal with Virgin, they were all set to be the biggest band in the country. However, wanting to retain their identity as an ‘experimental band’, they released this insane album called Dazzle Ships (now regarded as their masterpiece), which torpedoed their careers, seeing them go from three million record sales to 300,000. In one stupidly brave release, they culled 90 percent of their fan base.

I always slag off festivals and venues in Bristol for booking heritage acts, but sometimes I think an old band does deserve to come back… it’s important that risks (and records) like that are remembered.

When I was in Year 4 (eight, nine years old?) I had this hippie teacher who brought in a bunch of random instruments, got us into groups, and encouraged us to 'express ourselves' with them around the theme of ‘outer space’. While my mate got in fast so got to use the bongos, I got stuck with this fucking xylophone - I didn't have a clue what to do with it, so I just tapped bits of it. Each group played for a couple of minutes to the class, and sometimes my friend would get distracted and stop playing the bongos, leaving me in this xylophone-solo purgatory. I think that was when I first decided I despised music.

Ripping off Ben Wallers’ lyrics. Sometimes it’s a deliberate continuation/response to something he deals with satirically (Gentleman’s Magazine, The Pervert Endeavour etc), but in the drafting process with lyrics I’m constantly accidentally nicking phrases from him, and having to catch myself out and write new ones.

Joe Talbot, from our brothers IDLES, has given me and my band a wealth of generous and useful advice which I always carry with me. I recently interviewed him for my magazine The Bristol Germ, and he wrote a few things which I’ve been thinking about a lot in particular recently: ‘Don’t pay attention to anything but your instinct when it comes to your art. Work harder than anyone else… Don’t concern yourself with other people’s paths. Don’t wear sunglasses onstage’.

Me and the LICE boys always share stuff (Silas was my avenue into industrial and early post-punk music), and meeting other bands on the road has introduced me to a lot of great national artists far earlier than I would have heard of them (Yowl, Sweaty Palms, Hotel Lux etc.).

I also live in Bristol where everyone's doing really exciting things in music; you end up experiencing a lot of life-changing stuff totally by accident. One night I was walking past [the venue] Start The Bus, and decided on a whim to stop in and see if my friend Nick was around. I ended up walking in on the first performance by Scalping, a live-techno group and one of the best live bands I’ve ever seen.

There aren’t many music publications I genuinely respect, and what I see frequently publicised tends to wash over me (perhaps more than it should). Most of the great new music I listen to comes from friends with good taste recommending it, particularly my friend Joe Hatt (if only for showing me Blood Sport!).

The Crofters Rights, largely for sentimental reasons: it’s where we put on our first DIY headline show, it’s where we first got invited to play London, and it’s where I saw Blood Sport’s final Bristol gig. You can also get these weird beers there, and some of the best pizza in town.

Second place goes to The Old England, formerly a dealer-infested dive bar which the heroic new owner- Diego Rodriguez - cleaned up and made into this great space holding open improv nights and some of the best new bands in the country (DUDS, HMLTD etc.)

The Naturals (experimental art-rock). In their debut album Hive they released the first true masterpiece of the 21st century, before taking a long hiatus to focus on their side-project Giant Swan. After a year away, they recently returned to the fold with new tunes; I watched them recently and (unbelievably) all of their new songs are better than anything on Hive. They are geniuses, in the most undiluted sense of the term.

My chief field of interest is satire, so I’m inspired a lot by certain comedians (Doug Stanhope, Lenny Bruce) and writers (Kurt Vonnegut Jr. etc.). Whilst being in LICE I’ve been studying English at university, which has exposed me to a lot of stuff which has found its way into my lyrics; the second ‘chorus’ to The Human Parasite is a paraphrased line from a letter Jonathan Swift wrote to a friend after finishing Gulliver’s Travels.

The sequence of three ‘neuroses’ stories from Stammering Bill was inspired by the closer to Flann O’Briens’ At Swim Two Birds, which describes a German man obsessed with the number three: he makes three cups of tea with three lumps of sugar in each, then cuts his jugular with a razor three times, and scrawls on a picture of his wife ‘goodbye, goodbye, goodbye’.

Of our current releases, probably The Human Parasite. Dealing with the general notion of misanthropy, it was created lyrically as a sort of introduction to other forms of ‘hate’ we deal with in our songs (misogyny, xenophobia etc.). It showcases Silas’ spindly Rowland S. Howard [The Birthday Party] guitar lines and industrial, muted string-hits.

It showcases Bruce’s meticulous tom-heavy drumming (he is always trying to negotiate his metal background into our trashy post-punk sound), and demonstrates how Gareth’s confident bass-playing often forms the song’s melodic anchor, playing the ‘riffs’ that Silas would if he wasn’t so focused on making noise.

They are cathedrals, in which ambitious local promoters can bring strange new music and art to the huddled masses, inspiring the community and bringing about palpable change in the kind of music promoted and written here.

I am one of many people I know who have had their lives irreversibly changed in venues, and in Bristol they are dropping like flies due to neglect, and the scourge of frivolous noise complaints. When a venue closes (no matter how new or old it is) it is as the untimely death of a person: one can only wonder what remarkable contributions it may have made to peoples’ lives.

What can we expect from your Independent Venue Week/Strummerville show?

A lot of energy, a lot of noise, a lot of mess. We will be reunited with our brothers Yowl and finally seeing Heavy Lungs (the new kids on the block in Bristol - their drummer used to play in Velcro Hooks, who LICE were all huge fans of).

With the wind in our wings, we will swoop down on this glorious, historic, oft-overlooked corner of the land and deliver enlightenment to the huddled masses. Hark, at their jubilant cries in the street!