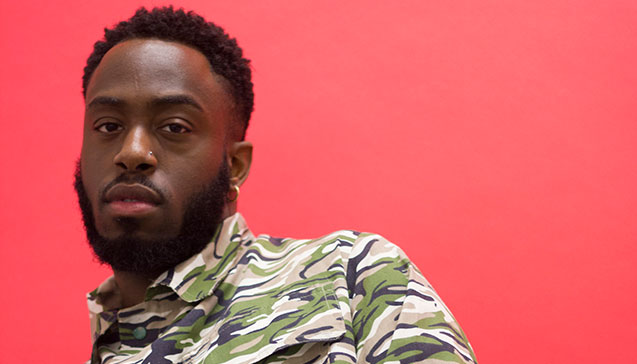 South Londoner Kadeem Tyrell is flying the flag for a new wave of British R&B, with gospel, East Coast hip-hop and nineties soul all shaping his smooth sound. Get the skinny...

South Londoner Kadeem Tyrell is flying the flag for a new wave of British R&B, with gospel, East Coast hip-hop and nineties soul stars Aaliyah and Brandy all shaping his smooth sound.

Born to musical parents and raised in the church community, it was inevitable that Kadeem's love for music would grow. His DJ father exposed him to everything from Lovers Rock to rare groove, while his gospel singing mother and aunt introduced him to raw vocal talent.

Following a string collabs over the last couple of years with East London producer Nat Brown and garage producer RYN, Kadeem is striking out solo in 2018.

His new EP, Feels, which features standout track Let Me Know, dropped just last week, and showcases a talent on the ascent. We get the skinny…

How did you first find your way into music-making?

I started writing when I was around 15, and then started recording on top of J Dilla / A Tribe Called Quests beats until I was 19 or 20. It was then I decided to take it more seriously and started collaborating with producers so I could learn how to record myself.

I decided to invest in my own studio, so I worked and saved and eventually I was able to get a home studio of my own. For a year or more I tested things out, challenged my songwriting skills, my flows and what style of music best represented me, working with Statik Motion (Nat Brown) and RYN on my first collaboration projects. It pushed me to find a way into music-making that was at arms’ reach.

When did you figure out you could sing and how have you trained your voice?

I found my voice at the age of 16 and did my best to understand it, understand the tone and range, and how I could possibly train myself to do different things with it. I haven’t been professionally trained just yet, I’ve trained myself through music and artists I listen to. The training hasn’t stopped and with professional training I’m determined to make it even better.

How has your family’s gospel background influenced your sound?

It’s influenced my writing skills quite a lot, to a point where I would like to believe my music could also fit into gospel lol. I speak on love a lot and that could be easily interpreted into the love one has for god. I also grew up in church and in a Christian household where gospel allowed me to find my voice.

What or who have been your biggest influences along the way?

I’ve been influenced heavily by life in general; my mum, my family and friends and everyday walks of life that I go through. Music and so many artists have influenced me but more in the way to challenge myself, my writing skills and overall bettering myself.

What’s the thinking behind your new single, Let Me Know?

Let Me Know had a lot of thought behind it and there’s two ways that I like to see it. Firstly, it has a lot of metaphors. I sat with my friend and writer Pia Morris and together we attacked lol. I wanted the song to be uplifting and happy, just like the Baker Aaron-produced beat, so everything had to match with a very nineties vibe. It’s about an exciting situation when you’re about to enter into a relationship with someone, and how growing together is the next step of creating a life with somebody.

Each day I pray that 2018 continues to be a year of growth so who knows what blessings come my way. But with that said, definitely more material, more videos and shows are in store for the rest of the year.

What do you make of the UK’s current R&B scene?

It’s definitely on the rise with amazing talent crawling out from left right and centre. Some would say that UK R&B isn’t what it used to be, but the R&B and soul scene is definitely there with amazing artists such as Ray Blk , Bxrber, Tiana Major9 just to name a few. It’s definitely coming and I’m so glad to be a part of its journey back onto the scene.

Kadeem Tyrell headlines the Servant Jazz Quarters on 30 May.